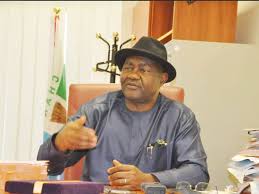 The attention of Senator Magnus Ngei Abe, immediate past representative of the Rivers South-East Senatorial District at the National Assembly has been drawn to a recent publication making the rounds in the media entitled: ‘Abe’s men as Wike’s Commissioners’ written by Eze Chukwuemeka Eze, a publicist for the Minister of Transportation, Rotimi Amaechi and self-acclaimed chieftain of the All Progressives Congress (APC).

Abe, in a statement by his spokesperson, Parry Saroh Benson described the publication as a pack of embellished lies, designed to promote hate in the APC family. It’s nothing but hatred orchestrated by bitterness.

Senator Abe stated that to the best of his knowledge no member of the APC was nominated into Governor Wike’s cabinet. Eze’s lies are designed sorely to deceive innocent Nigerians as Rivers people who know these nominees know that there is absolutely no reason for Eze’s statement other than to pander to the delusions of his paymasters.

Reading through Eze’s statement, it is clear that Eze and his sponsors are trying to incite the National leadership of the All Progressives Congress and its members in Rivers State against a resolution of the sponsored crisis in Rivers APC.

The senator stated that well-meaning members of the APC in Rivers State must take a second look at Eze’s antics and begin to ask critical questions.

Firstly, whose interest is Eze promoting at this point?

Secondly, what exactly is his stake in Rivers APC?
Thirdly, is Eze in any way affected by whatever befalls our State?

He is not an indigene, neither is he resident in Rivers State.

A neighbour who continually brings petrol to pour on his neighbours burning house cannot be a good Neighbour.

“It is time for Rivers APC members across every divide to disown Eze and his antics. A friend who is only happy when you are miserable: Who can only prosper when your house is in disarray cannot be a good friend.

Eze is clearly a conflict entrepreneur who is profiting from the crisis in the APC in Rivers State.

If at this stage in our situation, Eze can for whatever reason publicly calls on the NWC of our party to ignore the urgent need to reposition the APC in Rivers State: We all must be wary of him”.

The Senator stands by his comments.
“If Governor Wike who had been our opponent for several years could join other Rivers men and women across every divide to pay last respects to the late wife of a leader of the APC whose sacrifice and contribution to the APC in Rivers State is not in doubt, while Eze’s only response to the event is another statement against Senator Abe, without a thought to the pain and loss of a Rivers woman, whose husband contributed so much to the party, is that not enough proof that the senator’s comments were factual, truthful and in good faith?

As it is today, there is enough hatred, bitterness, and division in the APC in Rivers State. Eze and his paymasters have already achieved their objectives; all right-thinking members of the party should understand that Eze’s services are no longer required.

We must find healing and move forward for the sake of Rivers State,” the statement added.

181 thoughts on “I've No Hands In Wike's Appointments – Abe”