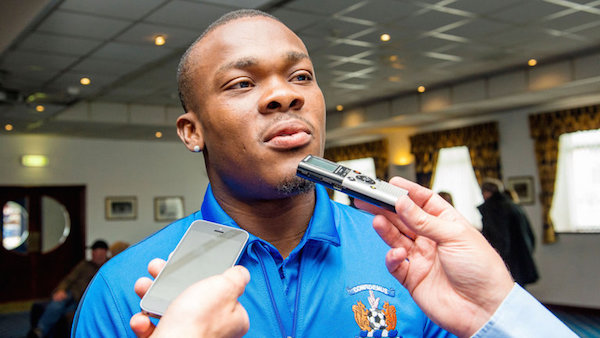 The 22-year-old joined the African giants from Scottish outfit Kilmarnock in the off season but failed to establish himself in the Egyptian top flight league.

And according to report, the Ivorian forward traveled to England without without informing the club last week, before issuing a controversial statement alleging that he departed the Red Castle following ill treatment from his teammates, claiming he was “treated like a slave.”

In an interview with Football365.FR, Coulibaly spoke about the reasons that led to his departure after only five months with the club, citing a number of reasons that he previously mentioned in a post on his Twitter account.

Despite repeatedly celebrating his goals at Al Ahly with a series of acrobatic flips, Coulibaly insisted he was asked to ‘bow down and pray’ every time he scored. He also added that some of his teammates weren’t welcoming and refused to co-operate with him.

‘I am a practicing Muslim. I do not need to show the world that I am a Muslim. This obligation to prostrate did not satisfy me,’ Coulibaly said.

‘The way of life and the style of play on the field did not suit me either. Some teammates like Abdallah [El-Said] and Hossam Ghaly did not pass the ball to me intentionally.

He added that he was not allowed to do interviews during his stint at Al Ahly. ‘The club had forbidden me fearing that I would unveil certain things…I have never been given the opportunity to get an interview with the club’s chairman so that I can share my problems with him.’

Nnewi: The small town of the super rich – By Forbes Magazine