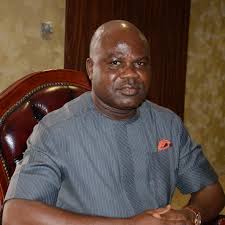 According to him, “his allegations are not only laughable, but portray the antics and desperation of one whose reprehensible acts are suddenly brought to light. They are nothing but the last kick of a dying horse”.

“Majority of Deltans know that there is nothing beyond this subterfuge contractor and are well aware of the various plots and plans of this failed contractor against me for daring to investigate the contracts in question”, he said.

He stressed that “the Delta State House of Assembly Committee on Works and indeed my humble self, Honourable (Chief) Evance Ochuko Ivwurie did not at any time place any demand holy or unholy, on Mr Uche Luke Okpunor of ULO Consultants Limited for personal gains or gratification whether with respect to my work as the Chairman of the Committee or in any other respect whatsoever”.

He said the allegations claimed by Okpunor, are only the figment of his own imaginations, urging him to explain what he meant by “unholy demands” just as he challenged him to make the footage of Closed Circuit Television (CCTV) public without further delay if they do exist, “just as I have made public his text messages to me, offering me and my Committee “Welfare Package” to compromise us which I rejected in my reply text to him”.

In his words: “In actual fact, the said allegation is a shameful attempt to turn the truth on its head. This is a classic case of the culprit playing the victim as a strategy to distract and hopefully derail the on-going investigation by the DTHA Committee on Works aimed at unraveling the reasons behind and exposing all non-performing contractors who with impunity abandon contracts awarded to them after receiving humongous payments from the State’s treasury, thereby undermining the government and people of Delta State”.

He noted that contractors “like ULO Consultants Limited of Mr Uche Luke Okpunor who has no respect for rules, regulation and the law, have willfully refused to honour our three (3) invitations. He has repeatedly given excuses of either being with or about to board a flight with and fly in the private jet of Honourable Minister Kachikwu Ibe or dropped the name of the respected Vice President (VP) Yemi Osinbajo (SAN) recklessly with the assertion that they are friends and classmates from Igbobi College and the VP calls him daily and does business with him; as such, he is so busy and unable to honour such invitations.

“It is for these flimsy excuses that Uche Luke Okpunor has refused to honour the Committee’s invitations to be personally available to present his side of the story at the three contract sites during our inspections, assessments and evaluations of the work he has done so far vis a vis the billions of naira he has been paid for the Asaba International Airport, Mariam Babangida Way and Sector “C” of the Asaba – Ughelli roads constructions”.

According to the chairman, House Committee on Works, “The committee discovered to it chagrin during the inspections, assessments and evaluation that Uche Luke Okpunor has been evasive because he has not performed efficiently on the contracts and he has abandoned the projects after collecting billions of naira. Following the discoveries, the Committee then immediately commenced investigation into the activities of ULO Consultants Ltd for abandoning the three projects after receiving billions of naira. Rather than appear before the Committee and offer explanations the vintage Uche Luke Okpunor has embarked on a campaign of calumny against the Delta State Governor, Sen. (Dr) Arthur Ifeanyichukwu Okowa and my humble self.

“The first time and day I ever spoke to and met Uche Luke Okpunor was on Wednesday 15, November 2017 when he called me to use the names of Vice President Osinbajo and Honourable Minister Ibe Kachikwu to say he is not participating in the first inspection of Thursday 16, November 2017 and being a Committee with human face, I personally met him and told him point blank that he must not fail to personally join us at the Asaba International Airport site at 9:00am the next day for the inspection so that he can brief the Committee on what he claimed was his side of the story.

“But rather than make himself available, he sent me an SMS on November 16, 2017 at about 9:24am while the inspection was going on. His text to me reads thus:

“Good morning honourable, For your information only. Me and the SPD have arranged a welfare package. My boy would deliver it today after the inspection. His name is Jerome.”

“I replied him immediately I saw the message at 11:41am which was after the inspection, and my text reads:

“Thank you very much for the offer sir, but am not interested in taking any money from you sir.”

“In a volte-face only typical of the timeless and vintage Uche Luke Okpunor, at about 5:46pm on the same day, he curiously and iniquitously replied me in another SMS, and his text reads:

“Good evening honourable, Plz, am just seeing your text message. I didn’t remember offering you any money. I hope nobody did on my behalf.”

“I immediately ignored his text as I imagined that he is a highly skilled ‘actor’ and ‘Capone’.

At press time, painstaking efforts to reach Okpunor to get his side of the story were abortive text message sent to his cellphone was not replied while he hang up call put across to him as soon as our correspondent introduced himself as a journalist.

We do no support Nnamdi kanu; We are peace and unity of the country: Igbo community in Kano