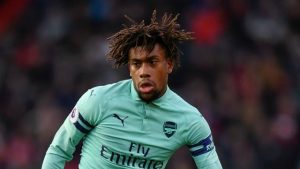 Alex Iwobi has opened up on his trying time at Arsenal, when the north London outfit showed less interest in tying him down to a deal.

Iwobi, then aged 16 and featuring in England youth setups, was told he could leave the club and had started reviewing offers from other teams, including a visit to Crystal Palace.

“My situation was weird,” Iwobi said in an Arsenal matchday programme interview, per The Sun .

“There was three of us at the time and we were basically told ‘stay if you want, or if not you are free to go.”

“It was up to me and at that moment I went to the Crystal Palace training ground to see them.

“I had offers from Celtic and Southampton as well. Celtic was the main one but I wasn’t ready to go to Scotland. I thought it was best to stay at Arsenal but I have to say it felt weird.

“I was playing for England but I felt maybe I wasn’t rated. My England team-mates and everyone else was getting in my ear saying that Arsenal don’t love me because they weren’t offering me a deal.

“It was hard especially because at school as well everyone was talking about it.”

Iwobi has since developed into a crucial member of Arsenal, bursting into the limelight under former coach Arsene Wenger in 2015. Currently, the 22-year-old has been pivotal to Unai Emery’s 21-game unbeaten run.

Earlier this year, he was rewarded with a  long-term contract that runs through till 2022 .

On the international scene, he is a Nigeria international who has featured at a World Cup and an African Cup of Nations outing is just on the horizon.

9 thoughts on “Iwobi opens up on trying times at Arsenal”