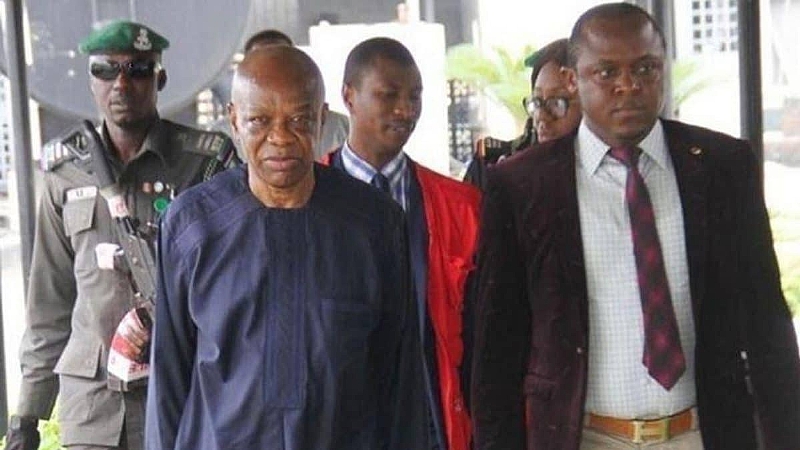 “The decision of the anti-graft agency- Economic and Financial Crimes Commission (EFCC) to act as the political hatchet machine of the ruling party- All Progressives Congress (APC) by going all out against the brother-in -law and legal counsel of the leading opposition figure Alhaji Atiku Abubakar and the erstwhile Chairman of the Independent National Electoral Commission (INEC) PROFESSOR Maurice Iwu perceived as being sympathetic to the Presidential candidate of the Peoples Democratic party (PDP) in the 2019 disputed Presidential poll Alhaji Atiku Abubakar has been described as unfathomable evil and a discriminatory practice which offends section 42(1) of the 1999 Constitution.”

With the above cotation the leading Pro-democracy and Non Governmental organisation- HUMAN RIGHTS WRITERS ASSOCIATION OF NIGERIA (HURIWA) Specifically reminded President Muhammadu Buhari and the EFCC that the Section 42 of the constitution forbids discriminatory application of the law or government policy based on politics or ethnicity or religion or belief system.

HURIWA said the selective and one-sided war against corruption waged against political opponents of the current President is unconstitutional and illegal and is a violation of section 42 of the constitution which deals specifically with the right to freedom from discrimination of the Nigerian citizens, that is, the RIGHT TO EQUALITY OF CITIZENS WHICH IS THE PRINCIPAL CORNERSTONE OF HUMAN RIGHTS UNICERSALLY.

The Prominent Civil Rights Advocacy group-HUMAN RIGHTS WRITERS ASSOCIATION OF NIGERIA (HURIWA) which made the observation in a statement by the National Coordinator Comrade Emmanuel Onwubiko and the National Media Affairs Director Miss Zainab Yusuf stated that it was shamefully criminal that an agency of the Federal Government funded by the taxpayers such as the Economic and Financial Crimes Commission (EFCC) can be so ruthlessly and shamelessly manipulated by the Federal Government of Nigeria to embark on the systematic and outright attacks against members and sympathisers of the leading opposition party of Peoples Democratic Party (PDP) whereas accused erstwhile members of the opposition party who crossed over to the ruling party or members of the ruling All Progressives Congress (APC) are spared and even elevated to join the Federal Cabinet of President Muhammadu Buhari just the Rights group maintains that this malpractice and misapplication of the EFCC ACT remains unconstitutional and extensively condemnable. The group stated that the international image of Nigeria is in fast decline due to these abuses of the due process of the law even as these tendencies to bend the laws to favour pokirical stooges of President Muhammadu Buhari is scaring away foreign dorect investors which inevitably has crippled the local economy leading to the ballooning poverty and the wanton economic adversity afflicting nearly 95 million Nigerian families who have IN the last four years become absolutely impoverished.

Specifically, HURIWA affirmed that it amounts to double standards for the government of Muhammadu Buhari to manipulate the EFCC to go after the persons connected with the leading opposition politician who is in the Election petition Tribunal contesting the victory awarded to the incumbent President Muhammadu Buhari by the Independent National Electoral Commission (INEC) whereas the duo of the former minority leader in the Senate and former PDP elected two terms governor of Akwa Ibom state Senator Godswill Akpabio and former governor of Bayelsa state Mr. Timipre Silver both of whom are accused of serious cases of fraud whilst in political offices but who are now enjoying the status of sacred cows under the Buhari-led government are now treated as being above The law.

The Rights group said the prosecution of the erstwhile INEC chairman only because he is perceived by the hawks in the Presidency to be connected to the opposition PRESIDENTIAL candidate in the last election makes the entire anti graft fight a ruse, a monumental caricature and a fraud which is only but a well choreographed battle against political oppositions and persons who have lost the favours of the all powerful ‘Abuja emperor’ calling the shots from the AsoRock Presidential Villa just as the group said that the charade has now been seen by all right thinking pPERSONS all over the World for what it truly is- political witch-hunt.

“We also particularly condemn the extremely harsh conditions imposed by the Federal High Court Lagos division against the former Chairman of INEC Maurice Iwu even when section 36(5) states that accused persons are innocent until proven guilty shows that the judge has already passed a verdict even before the matter has been argued on its merits. How come an accused person purportedly to have laundered N1.2billion asked to produce N1billion as bail bond by a judge who is yet to take the legal positions of the parties in the matter? This is a classic case of passing the verdict even before any form of fair hearing has been extended to the defendant as provided for by the constitution of the Federal Republic of Nigeria of 1999 (as amended)”.

The Rights group said the EFCC framed a three-count charge, signed by prosecuting counsel Rotimi Oyedepo, which was subsequently filed at the Federal High Court in Lagos against Giwa-Osagie and Atiku’ s brother-in-law.

HURIWA recalled that parts of the charges reads: “That you Uyiekpen Giwa-Osagie, on or before the 12th day of February 2019 in Nigeria, within the jurisdiction of this honourable court, procured Erhunse Giwa-Osagie to make cash payment of the sum of $2,000,000.00 without going through financial institution.” the charge read.

“That you Erhunse Giwa-Osagie, sometimes in February 2019 in Nigeria, within the jurisdiction of this honourable court, made the payment of the sum of $2,000,000.00without going through a financial institution, which sum exceeded the amount.”

HURIWA however strongly condemns the EFCC for playing the political card with their otherwise sensitive national job of getting rid of all manifestations of corruption irrespective of political status of the offender nor the ethno- religious affiliations of such a person.

HURIWA queried the transparency in the entire operations of EFCC during the last Presidential poll when it only looked the way of the opposition PDP but became deaf, dumb and blind when two bullion vans said to be heavily loaded with cash entered the Lagos home of the National leader of All Progressives Congress on the eve of the Presidential election and was allegedly dispensed to would be voters and thugs by the APC. The decision to go after the opposition PRESIDENTIAL candidate in the last election by the EFCC has only demonstrated the veracity of the claims in many quarters that the EFCC is grossly irresponsible and SELECTIVE in both its operations and prosecution.

HURIWA said:”Isn’t it comical and irrational that the APC freely shared money during the elections and indeed photographic evidence emerged of fully loaded suspected Central Bank of Nigeria’s owned bullion vans that entered the home of the APC national leader in Lagos but was not intercepted by EFCC but here is the partisan EFCC disclosing that Uyiekpen Giwa-Osagie, on or before the 12th day of February 2019 in Nigeria, within the jurisdiction of this honourable court, procured Erhunse Giwa-Osagie to make cash payment of the sum of $2,000,000.00 without going through financial institution? This method of one sided law enforcement makes Nigeria a laughing stock of the global community of sane and civilised persons.”

“May we ask this politically biased EFCC whether it was right that APC could convey cash in bullion vans and use agents of money transactions as they did during The last poll but now the commission said Giwa-Osagie’s action is contrary to Section 18(c) of the Money Laundering (Prohibition). Why the discrimination on the ground of political affiliations?”

HURIWA condemned the serial discriminatory prosecution of persons by EFCC based on the membership of political parties since ‘one former governor’ once arrested and questioned for over N100 billion alleged theft of public fund when he was in PDP has now been made a minister by President Muhammadu Buhari and his ‘sins’ as it were are forgiven whereas Professor Maurice Iwu the former INEC Chairman perceived as being sympathetic to PDP and Atiku Abubakar is accused of ‘paltry’ N1.2 billion money laundering allegations but has been thrown into Ikoyi Prison whereas the APC’s ‘newly canonized’ political saint who was accused of N100 billion alleged theft of his state’s fund is dining and wining with President Muhammadu Buhari and we still deceive ourselves that there is any anti-graft crusade going On? These things only happen in banana republic.”