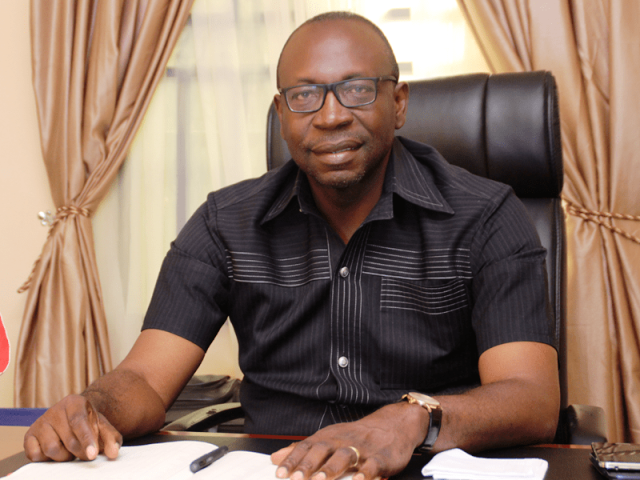 Pastor Osagie Ize-Iyamu cut his political teeth in the late 1980’s as a Personal Assistant to Chief Lucky Nosakhare Igbinedion while the latter held sway as the Chairman of Oredo Local Government Area of Benin. The lawyer turned politician was in his late twenties then and his boss had the credit of being one of the best LG Chairmen in the country. So popular was the scion of Chief Gabriel Osawaru Igbinedion that he was prevailed upon to run for the exalted office of Governor in 1991 when Edo State was created out of the then Bendel State which comprised of it and Delta.

Ize-Iyamu handled the campaign of his boss but they sadly lost to Chief John Odigie-Oyegun, the former APC National Chairman who was the first civilian governor of the state.

Ize-Iyamu went into oblivion when the military struck but bounced back in 1999 as the Chief of Staff and in 2003 Secretary to the State Government under the Lucky Igbinedion led administration. He was the most influential politician in the cabinet and the only one not affected by any cabinet reshuffle. He had the ears of his boss in every matter affecting the state and often deputized for him when he away from the state as he frequently was.

He indicated his interest in succeeding Igbinedion through the formation of the Grace Group but had to drop the ambition because of the zoning arrangement that the then ruling PDP had which zoned the governorship to Edo central. He and Igbinedion hail from Edo South.

Dissatisfied with the PDP, he and his numerous supporters defected to the then Action Congress of Nigeria where he later became the National Vice Chairman South-South of the party. He was largely instrumental to the emergence of Comrade Adams Oshiomhole as the Governor in 2008 and stood with him through thick and thin while he was at the elections petitions tribunal between 2007 and 2008.

In 2012, he was the Director-General of Oshiomhole’s campaign team and ensured his second term victory. Cracks between the Comrade Governor and him emerged during the thorny issue of succession in the Dennis Osadebay Avenue. The diminutive governor preferred the current Governor Godwin Obaseki who was the Chairman of the Economic Team to succeed him. In anger, Ize-Iyamu defected back to the PDP and became the party’s gubernatorial flagbearer. He and Oshiomhole threw frequent brick bats in public and the campaign was full of mud slinging. At the end the pastor lost and he headed to the elections petition tribunal and up to the Supreme Court where he still lost.

He laid low and has been quiet lately until the news broke in the Tribune newspapers that he had perfected plans to defect to the APC and at some point went to Abuja to prefect his defection strategy. Before then, he had been expelled from the PDP for anti-party activities because he didn’t affirm or deny his planned defection to the APC.

Many political pundits found this rather surprising as they thought he would re-contest in 2020 to unseat Obaseki. By 2024, Obaseki would be through and an unwritten agreement may see power shift to the central senatorial district which only produced Prof Oserhimen Osunbor for a year. 2020 would have been the best chance for Ize-Iyamu to become the occupant of Dennis Osadebey Avenue as he would be too old to become governor by the time power comes back to the south. There is no way he can unseat Obaseki in the next year’s primaries as the soft spoken governor is in full control of his party’s political machinery cum structure. Does that mean Ize-Iyamu has kissed his ambition good bye for good?

Politicians especially in this part of the world are a very funny lot. The way they cross carpet and eat their world can awaken the dead from their cold graves. Here was a so called ‘Man of God’ who thoroughly lambasted Oshiomhole, Obaseki and the entire APC during his ill-fated campaign barely three years ago and now wants to go back to his vomit. It is pathetic and sad that one of the deadly sins espoused by Indian nationalist, Mahatma Ghandi ‘politics without principle’ is at play here.

I wouldn’t be amazed if he defects back to the PDP in the future and Nigerian politicians are basically driven by stomach infrastructure apologies to former Ekiti state Governor, Peter Ayodele Fayose. The consideration of their ever growing protruding bellies is the driving force behind their actions and political affiliations and not what they can do for the people whose mandate they are supposed to exercise on their behalf.

Ize-Iyamu has always been a state and home based politician. Maybe he is looking for something at the federal level this time around. Who knows?

Nigeria is in dire need of politicians who will be on the study side of the people and not opportunists who take the people for a ride. We desperately need home grown Nelson Mandela clones at all levels in the extremely battered polity for this nation with high potentials to move forward.