Job Racketing And State’s Quotas In Nigeria’s Federal Jobs: The Case Of Bayelsa

Job Racketing And State’s Quotas In Nigeria’s Federal Jobs: The Case Of Bayelsa 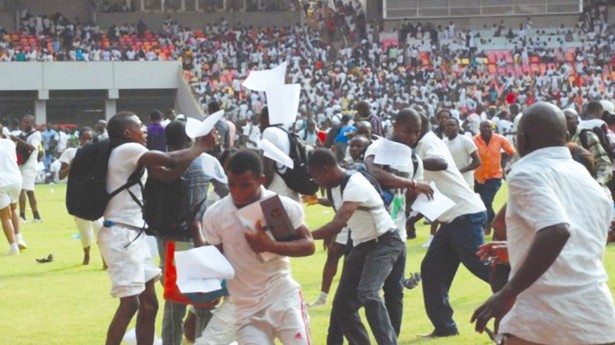 THE PATHETIC PLIGHT OF BAYELSA JOB SEEKERS
More and more graduates of Bayelsa origin are turned out annually by academic institutions within and outside the state, to grope for employment in the competitive labour market. The staggering number of 12,335 graduates that applied for 1,000 job openings in the state civil service, this year, captures the nightmare of graduate-unemployment.

The unemployment rate is understandable, considering the unindustrialised nature of the state; poor entrepreneurship culture; desire to be home-based to make easy money, a trend now checked by Governor Seriake Dickson's reforms, and the fact that the state's public sector cannot take on all the graduates. The scenario makes the Federal Civil Service, the graduands' major resort. This is aside self-employment which though is yet to be practically and massively explored.

Whereas, the private sector also lacks capacity to absorb enough graduates, Bayelsans, since creation of the state, shirked going for their quota in Federal employments. Fresh and old graduates from the state, usually cite the distance from the state to Abuja where the recruitments take place and the cost of attending the interviews; fear of being posted to distant places after offer of job; tribalism and man-know-man syndromes, online job scamming, among others, as reasons they shy away from applying for federal vacancies.

Indeed, the above excuses, seem to be plausible, considering for instance, how the processes of recruitment into federal vacancies were in the past, done stealthily or were made open but connected applicants were enlisted secretly before using formal exercises to cover up and some slots given to some unconnected lucky persons. Short lists of recruited persons had in the past stunningly shown names from other states and tribes, in Bayelsa's columns and rows, perhaps, due to absence of or inadequate applications from the state, to fill up its quota. The appearance of non-bonafide Bayelsans in past lists was also believed to have been deliberate act to short change its indigenes. To an extent, this is sometimes, applicable to scholarship lists published by oil companies and the Federal Government. Funnily, indigenes of the state endorse such cheating against their own people, for selfish motives or lack of patriotism.

Recently, the Senate Committee on Establishment, raised a case of 80 job seekers allegedly defrauded of N250,000 each, totalling N20million. This was disclosed by Chairman of the Committee, Senator Emmanuel Paulker, at the screening of three commissioner nominees for the Federal Civil Service Commission. He said, some of the job seekers who were allegedly swindled by insiders in the Commission, were asked to start work, while others were withdrawn. The Senator decried that the Independent and Corrupt Practices Commission which investigated the matter, was yet to make its report known to the Senate. The fraud is “a huge embarrassment to the country, [and] shouldn't be swept under the carpet”, Paulker urged the Senate and the ICPC.

Bayelsa, where Senator Paulker hails from, is considered as one of the states most cheated in terms of federal employments. But, Bayelsans' lack of keen interest for federal jobs, could also be adduced as haven given opportunity to job racketeers at the Federal level, to highjack slots meant for them. Often times, a few patriotic federal officers draw the state's attention to vacancies meant for its people, and also give good time frame to have them filled up by Bayelsa indigenes, but some of such opportunities are not utilised.

For instance, in 2012, the Bayelsa House in Abuja was asked to scout for a Bayelsan charted in accounting to take up the state's vacancy quota in the federal service, but those contacted declined, on the ground that they prefer to work in the state. Also, an assistant directorship position reserved for Bayelsa State in one of the federal examination boards was not quickly taken up, and must have been lost to another state. In 2015/2016, Bayelsa, was among a few states totally excluded from employments given by one of the communication agencies, a revenue agency and two federal universities, but the recruitment exercises were at that time halted due to the intervention of the Federal Character Commission which acted on petitions. There even are more instances.

These developments have left Bayelsa State as one of the least states in terms of parading its people across the ranks in the federal civil and public service.

CHECKS BY THIS AUTHOR, AT THE COMMISSION
Irked by the developments, this journslist made some checks at the Federal Civil Service Commission located at Wuse Zone 3, near the Federal Customs Service and Federal Road Safety Commission in Abuja. Our correspondent set out to ascertain the rate of applications from Bayelsa graduates who seek for federal jobs, among other issues.

A staff in the Office of the Commissioner for Bayelsa, Delta and Rivers States in the Federal Civil Service Commission, who craved anonymity because the commission presently has no commissioners appointed for states, gave indications that Bayelsans, especially, graduates are applying for vacancies more than before. The source disclosed that in the last recruitment exercise of 2016, the number of applicants from Bayelsa was more than those of past ones.

The source, who ruled out malpractices in the commission's recruitment exercises, stated that with the use of quota system, every qualified and successful applicants from all the states, stand the chance of being employed to complete his/her state's quota without discrimination. According to the source, if available vacancies cannot go round the States and Abuja, for instance, 12 positions, they are shared 2 to each of the 6 zones, for applicants to contest.

The source who said there were no backdoor recruitments, stated that the commission was bound by rules and monitoring mechanisms, adding there were also representatives of all the states, serving in the commission, as the eyes of their people.

When asked by our correspondent to show documents as proofs of increased applications from Bayelsa and number of its indigenes so far employed, the source said that there was no commissioner presently in charge of the office.

The official contended that the commission's use of online methods, powered by its website and portal, has further created awareness about vacancies and made the process even more transparent.

The source however said that Bayelsa State graduates could redouble efforts to apply for federal jobs, hinting that massive vacancies are expected to exist with time, but cautioned prospective applicants against fraudulent announcements of federal jobs, by scammers.

A press official in the commission who wished not to be named, gave similar information to our correspondent, stressing that federal vacancies are for the 36 states and Abuja, the Federal Capital Territory.

He added that based on the Federal Character Principle, the 36 states share vacancies equally, while Abuja takes one third of what a state gets, stressing that every state, including Bayelsa, ought to take advantage to fill its quota.

According to the press official, the commission, has apart from online strategy, categorised and decentralised vacancies and venues of recruitment exercises to the six geopolitical zones of the country, to motivate people far from Abuja to be part of the exercises, and to also ease participation.

The press staff added that despite these policies, Abuja as the Federal Capital Territory belongs to all Nigerians, hence Bayelsa job seekers should not shy away from residing and working in the city, to get career benefits, including the wonderful experience of working in the federal capital and knowing different persons.

WHAT BAYELSA AND OTHER AFFECTED STATES NEED TO DO
Against the backdrop of the information so far generated, and the demerits of losing employment opportunities as well as the risk of lacking top brass at the Federal Service, Bayelsa State indigenes really need to grab its quota. More over, at the federal level, many statutory fringe benefits, for instance, local and foreign trainings and oversea assignments with allowances; posting and first-28 days largesse; leave bonuses; car, housing and corporative society loans, among others are still adhered to.

To motivate Bayelsans, both unemployed and those serving in the State Service desirous of working at the federal level, the State Government should revisit the idea mooted at the onset of the Late Chief D. S. P Alamieyeseigha administration and even by Governor Dickson in his first tenure, to assist interested unemployed graduates to get federal jobs; work for transfer of interested staff of the state, as well as motivate them with financial and accommodation supports.

Bayelsans at the federal level, in all arms of government, especially those representing the state in the National Assembly, should protect the interest of the people in recruitments. They should not give slots to their kith and kin or supporters alone, but let others also benefit.

These strategies and others, could enable Bayelsa get its full share of national jobs, to not only empower the people, but also to create a class of top technocrats and bureaucrats of the state's origin at the national public service.

Judiciary and the audacity of impunity

9 thoughts on “Job Racketing And State's Quotas In Nigeria's Federal Jobs: The Case Of Bayelsa”