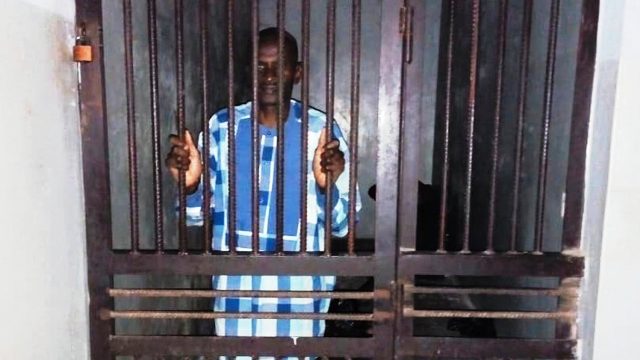 The Federal High Court in Abuja on Monday softened the bail conditions for a Bayelsa State-based journalist, Jones Abiri.

The News Agency of Nigeria reports that on June 24, Abiri was arraigned on a three-count charge of terrorism, economic sabotage and fraud.

Justice Ijeoma Ojukwu had earlier granted him N100 million bail with one surety in like sum, wherein she ordered that the surety must own a landed property in Abuja metropolis.

Abiri was unable to meet the requirements to regain his freedom, forcing his counsel, Samuel Ogala, to apply before the court to vary the bail terms.

The judge, however, on Monday gave Abiri new bail conditions.

In the varied bail terms, Ojukwu ordered one Frederick Lokpobri, a level 14 officer of the Federal Ministry of Power, who elected to stand as surety for Abiri, to swear to an affidavit.

The judge ordered Lokpobri to swear to an affidavit of means commensurate with the bail sum earlier granted.

He was also asked to deposit originals of the title documents of his landed property situated at the Nassarawa axis before the court registrar.

Ogala in a motion dated September 2 and filed on September 3, informed the court that his client was unable to meet the previous bail conditions because Abiri knew no one with a landed property within Abuja metropolis.

The Federal Prosecutor, Bagudu Sani, opposed the bail application in a counter affidavit, urging the court to discountenance it.

The Counsel to Abiri argued that the prosecution failed to adduce cogent reasons why the application for variation should not be granted.

Ojukwu granted the bail application and adjourned the matter until Octobner 17 for trial.

While addressing newsmen after the court proceedings, Ogala said he hoped Abiri would be released after perfecting the new bail conditions.

Buhari promises to seek release of all Chibok girls