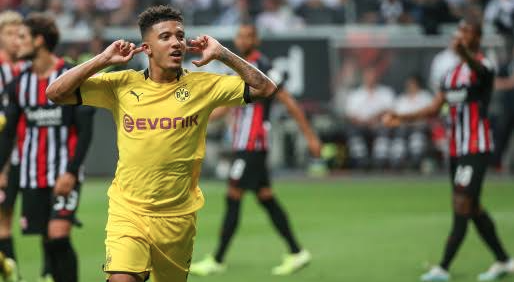 According to a report on the Daily Star, the Red Devils have already held talks with the representative of the youngster for a probable £100M switch, but would have to contend with Los Blancos for his signature.

Sancho, 20 apparently is one of the high profile players that will be sought after in the next transfer window.

Recall that the two juggernauts have a long running feud that errupted from the signing of Cristiano Ronaldo from United in 2009 as well as Los Blancos’ attempt to snap up David De Gea back to the Spanish capital in 2018 before settling for Belgian shotstopper, Thibaut Courtois.

Jadon Sancho has hit the ground running since he joined the German outfit three years ago. The starlet has bagged 17 goals and 19 assists in 35 across all competitions this season.

The Red Devils are in dire need of a key signing upfront bolster their chances upfront and Sancho would be a best bet for the Manchester side. United however would hate to miss out on the signing of the youngster to Los Blancos.

UCL FINAL: Madrid Have Experience But We Can Hurt Them – Klopp