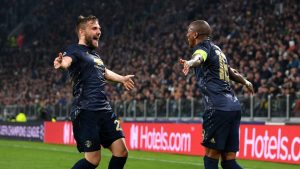 Juventus coach Massimiliano Allegri believes Marouane Fellaini made the difference and helped Manchester United to a 2-1 win in the Champions League.

The 30-year-old was introduced with United trailing to  Cristiano Ronaldo’s stunning volley, his first Champions League goal for the club  .

But the visitors claimed a surprise win thanks to Juan Mata’s free-kick and an Alex Sandro own goal on Wednesday, with Jose Mourinho’s side turning to Fellaini as the visitors took a more direct approach to spark their comeback.

The Belgium international almost got on the end of Ashley Young’s set-piece that led to the winning goal and, even though he did not find the net, Allegri said Fellaini was decisive in the Group H clash.

“In the first game, they didn’t have Fellaini and we used his absence to our advantage,” Allegri told a news conference.

“Tonight, he played and his physical presence was immediately felt. He controlled some high balls, although sometimes we were good at playing the ball on the ground.

“Conceding those free-kicks was our greatest mistake. That happened and we paid the price.

“We’ll have to learn from that.”
View image on Twitter
Marouane Fellaini
✔ @Fellaini
So happy to be back from injury and for the win tonight # MUFC

Twitter Ads info and privacy
The loss to the Premier League giants was the first of the season for Juventus, who were off to a perfect start in the Champions League before Wednesday and are still unbeaten in Serie A play.

Juve remain top of Group H on nine points, two clear of United and well ahead of Valencia (five) and Young Boys (one).

The club are also well ahead of the competition in the Italian top flight, sitting five points clear of Inter and Napoli at the top of the table.

Sunday will see Juve return to Serie A action with a clash against Milan ahead of the international break.

They will close out the group stage of the Champions League with showdowns against Valencia on November 27 and Young Boys on December 12.

Michy Batshuayi scores a brace for Dortmund on debut