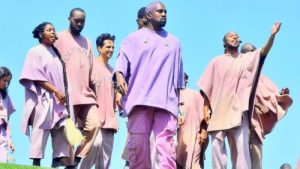 Prior to the release of his forthcoming project,  Jesus Is King , Chicago-native  Kanye West  graced his hometown with the latest installment of his weekly gospel and worship  Sunday Service  series earlier today. Albeit a rainy day in Chicago, West came out in full force alongside the choir, performing “Jesus Walks” as well as tapping  Chance the Rapper  to perform his verse from  The Life of Pablo ‘s “Ultralight Beam.”

Though the livestream has ended, fans can watch the livestream via YouTube below. Around the 45-minute mark, fans can also take a look at Kanye doing what he does best — making an eclectic beat on-the-spot. The Chicago performance originally released free tickets for the event on Saturday, which were rapidly eaten up by hungry fans eager to see the artist live, and follows Ye’s previous Sunday Services in Calabasas,  Coachella ,  San Fernando Valley ,  Dayton , and  Watts .

Kanye West’s Jesus Is King is slated to drop on September 27.