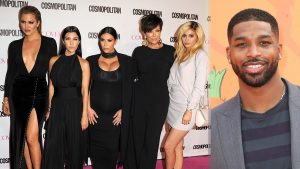 Following speculation that Tristan Thompson allegedly cheated on heavily pregnant wife Khloe Kardashian over the weekend, the whole Kardashian-Jenner clan have unfollowed him on social media, the Mirror say.

The Daily Mail is reporting the basketball player got a�?up close and personala�? with another woman at a rooftop bar in New York City on March 7 2018, and are speculating about how he was allegedly seen kissing a�� and later going back to his hotel room with a�� someone who was not Khloe.

An a�?onlookera�� told the publication,a�?I was there and he was on the table right next to us with a group of friends. They were holding each othera�� and everybody watched them make out several times.a�?

While Khloe or Tristan havena��t yet commented on the claims, the Mirror are now reporting that every member of the Kardashian family have unfollowed him on social media.

While this isna��t a definite confirmation that the rumours are true and that we should belief every part of the speculation, does the social media move give a little insight into whata��s going on behind closed doors?

So the cheating rumours remain solely speculation, but wea��re potentially one step closer to knowing whata��s actually going on between Khloe and Tristan.

₦1 Million To Be Won In #CabalMustGo Campaign