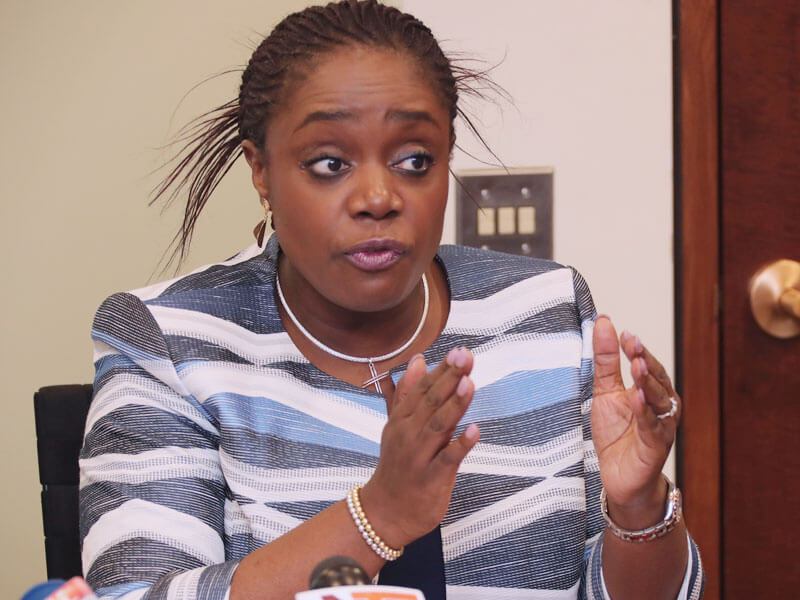 Let me start this week’s essay on a spiritual note. This is because we are a country of religion, sometimes to its extreme, but most times in hypocrisy. We mouth virtues with the enthusiasm of a priest or imam but act out vices with the fanaticism of an extremist. Some of our political leaders are so shameless that they thrive in evil but pay putrefying obeisance to God either on Fridays or on Sundays with celestial mien and heavenly gait. Most unfortunately, these same set of people commit various crimes with audacity, cover or even encourage others to do so one way or the other.

That is the case of the current minister of finance, Mrs Kemi Adeosun, who was recently exposed by an online newspaper, Premium Times, as having allegedly forged the NYSC exemption certificate with which she has been working and holding high profile offices in Nigeria. That a person of her status could condescend so low as to agree and or conspire with common criminals to forge an NYSC exemption certificate as revealed in that report shows how bereft of even the commonest virtues she is.

The story has it that Kemi Adeosun, one of Nigeria’s foremost ministers in the integrity-mouthed but honesty-depraved Buhari-led administration, graduated from the University of East London in 1989 at the age of 22. The law setting up the NYSC scheme with the aim of integrating and further building a sense of oneness and patriotism among young Nigerians require that every Nigerian who wishes to be engaged in a formal employment either by public or private organisatons must show proof with the NYSC discharge certificate that he or she has participated in the one year compulsory programme if a graduate at any age below 30, or show an exemption certificate legally issued to the person by the National Youth Service Corps, NYSC, if the person graduated at age 30 or above.

It is not only that Adeosun skipped the NYSC programme as required by law having graduated at the age of 22 but it is also that she went a step further to add salt to injury by allegedly forging the Corps’ exemption certificate. The reported forged certificate which she parades was signed by a Director-General of the Corps, Yusuf Bomoi, in September 2009, when facts show that the said DG actually stepped down from the NYSC earlier in January of the same 2009 and could not have signed a certificate eight months earlier.

More worrisome is the conspiracy of silence, the incomprehensible and reprehensible acts of cover up by all actors involved in this scandal of monumental proportions at the highest levels in the land. From Adeosun who should have saved herself further embarrassment and the public storm by resigning immediately or even long before now, to the NYSC that has maintained ignoble silence apart from its earlier terse statement, to the president of the country, to Prof Itse Sagay who has been professing nothing but profanities in the ridiculous defence of the minister, Muhammadu Buhari, who has the right but seems to lack the will to fire her for such an impetuous crime that has further brought our nation to a state of ridicule before the international community and exposed the Buhari administration as one of hypocrisy and sophistry particularly as it concerns the well advertised ‘saintly’ records of integrity of his administration.

With the many high profile scandals which the Buhari administration has been caught in and which the president has deliberately neglected, failed and or refused to act upon as expected of any ‘man of integrity’, the mantra of fight against corruption is reduced to nothing but shadow boxing where political opponents are brutally hounded while the real criminals in the president’s party and or government are allowed free reign and access to our common purse when they are actually supposed to be cooling their feet in jail for their criminal acts.

From the Babachir Lawal’s ‘grasscutter’ scandal, the Abdulrashid Maina’s pension and recall scam, the NHIS scandal and even to the EFCC Chair’s Ibrahim Magu’s scandal among others, President Buhari has always failed to act when integrity calls upon him to do so. For example, he has continued to keep Ibrahim Magu as an unconfirmed chairman of the EFCC against the advice of the senate on the strength of damning reports of criminal breaches against him by a sister security organization, the Department of State Services, DSS. The Adeosun’s case is the latest in a retinue of scandalous events which the president has glossed over.

It is depressing to graduates who have completed their NYSC and others who are yet but are hoping to be compulsorily enlisted in the scheme as a prerequisite for getting employed, and painful to rational Nigerians to see a Kemi Adeosun who is said to have deliberately circumvented the law and conspired with criminal elements to forge a document of the Federal Republic of Nigeria as represented by NYSC and still use that same forged document to get herself plum jobs when sincerer Nigerians who have subjected themselves to the rigours of the scheme just to ensure they do not run afoul of the law still roam the streets for a job no matter how menial.

Has the minister of finance bewitched our president with her borrowed accent? Or has she used what she’s got to retain her job in the face of such a cheap scandal just like the Babachir Lawals of this world must have done? Is our president still giving to such vanities at his age? Could he still be swayed by the display of fleeting allures from anyone? Can our president be bought over by anyone whether in cash or in kind at his age and level? Although I so much doubt it but the president’s continued inaction in the face of these scandals contrary to what is expected from a man who rode to power on “There will be no sacred cow” mantra gives room for the world to begin to postulate on several possibilities touching on morality and virtue.

This singular scandal further brings a dent not only to the highest office of the land but also to other institutions of critical importance like the NYSC, the police and other relevant security agencies who should have acted and swung into action by further investigating the matter and bring the culprit to book in compliance with our laws. The failure of all these people/institutions to act in this particular instance is one of the reasons Nigerians have given knocks to the avowed fight against corruption of the Buhari administration saying that the fight against corruption is not only one sided but is also being used as an instrument of witch hunt to silence the opposition and gag dissenting voices while corrupt officials and forgers in the president’s fold receive a pat on their backs for their criminal exploits.

The example which the Adeosun saga is leaving to the youths is disastrous and a further damage to the education policies of government. The impression being created now is that our youths can freely forge certificates and circumvent our laws as long as they have close relations and or associates in government who can cover up for them. The wrong message that education and service to fatherland even if only through the NYSC scheme is nothing but just a waste of time and only for the unfortunate lot not privileged enough to be close to the powerful is grave. Such impressions further discourage our youths from seeking education and pursuing their legitimate ambitions within the confines of the law, a situation that further kills the spirit of patriotism in them.

To save the nation from this looming doom, it is strongly advised that the president and his administration address head-on not only the Adeosun certificate saga but also all scandals it has attempted to sweep under the carpet in order to heal the nation of this cancerous wound called corruption but also to put the nation back on the path of progressive nation building through the embracement of national values and personal virtues by all citizens. This is the only way we can effect the much vaunted change and progress our nation is in dire need of.

Adesoun as a person should stop doing herself any further damage by upholding the integrity of her parental upbringing and the certificate of her alma mater, the University of London, by doing the right thing which is to resign from her plum job as Nigeria’s Minister of Finance, return all the entitlements and emoluments she has received not only as minister but also as former commissioner of finance in Ogun State, and other places she had worked in Nigeria without the required certificate, submit herself to the relevant security agencies for prosecution, and apologise to Nigerians for having deceived them thus far even at the highest level. This is the minimum demand of morality and the definition of virtue. After she has done all these and possibly convicted by the courts, the president can now grant her a presidential pardon if he feels so strongly about her so that she can start her life on a fresh and clean note. The sky can still be her limit.

The Catechism of the Catholic Church 1805 teaches that “Four virtues play a pivotal role and accordingly are called “cardinal”, all the others (virtues) are grouped around them. They are prudence, justice, fortitude and temperance”. The Buhari administration must not add forgery to it by treating Kemi Adeosun as a saint that she is obviously not.

Osun Election: Is this the INEC or should We Expect another?

168 thoughts on “Kemi Adeosun: When Forgery is Elevated to a Cardinal Virtue”