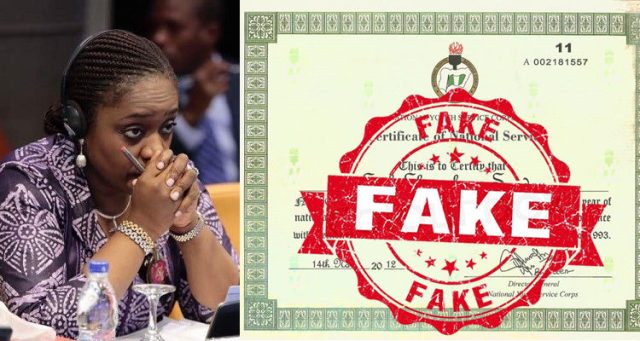 An online newspaper, Premium Times had reported that the Minister who graduated from London East Polytechnic at the age of 22 in 1989, failed to comply with NYSC Act, which made it compulsory for every Nigerian graduate at home or abroad to participate in one year of mandatory service to the nation.

Following the uproar trailing the controversy, the management of the NYSC said based on their records, Adeosun actually applied for an exemption certificate but did not state whether the request was granted or not.

A top source in the Presidency told Daily Trust on Sunday that a formal request has been made, directing the NYSC to investigate the forgery allegation against the minister.

The source said a formal letter was written to the NYSC and that the outcome of the investigation was being awaited.

At the end of the Federal Executive Council (FEC) meeting last Wednesday, the Minister of Information and Culture, Alhaji Lai Mohammed, said since NYSC has spoken on the issue, the federal government has done so.

The NYSC enabling law prescribes punishment for anyone who absconds from the scheme or forges its certificates and any eligible Nigerian who skipped the service is liable to be sentenced to 12 months imprisonment and/or N2, 000 fine, according to Section 13 of the NYSC law.

Section 13 (3) subsection 4 also criminalises giving false information or illegally obtaining the agency’s certificate. It provides for up to three-year jail term for such offenders.

According to official credentials obtained by Premium Times the minister parades a purported NYSC exemption certificate, which was issued in September 2009, granting her exemption from the mandatory service on account of age.

The newspaper claimed that Mrs Adeosun graduated in 1989 at 22 years from the Polytechnic of East London. Her curriculum vitae indicated that she was born in March 1967. It noted that the institution changed its name to University of East London in 1992.

The report added that the minister did not return to Nigeria for the one year NYSC programme but remained in Britain for a career in the public and private sectors.

It was gathered that she returned to Nigeria in 2002 and did not participate in the NYSC programme but allegedly obtained a “fake” certificate in 2009. The certificate was dated September 9, 2009, and signed by Yusuf Bomoi, a former director-general of the corps. Bomoi was dropped as director-general in January 2009.

However, the NYSC in a statement by the Director, Press and Publications Relations, Mrs. Adenike Adeyemi, said that based on their records, Adeosun actually applied for an Exemption Certificate.

Few days into the allegations, Minister of Youths and Sports, Barrister Solomon Dalung, summoned the Director-General of the NYSC, Brigadier-General Suleiman Kazaure over the matter.

General Maharazu Tsiga (rtd), who was appointed Director-General in January 2009, told Premium Times that is easy to identify a fake certificate. He explained that the corps has a “strong room” where it can be proved if a certificate is genuine or not.

According to him, it is not possible for a person who is below 30 years to be granted an exemption waiver, pointing out that even if someone is 100-years- old, he/she must serve if it is discovered that the person had not done so.

Daily Trust on Sunday gathered that unlike in the past, the quick presidential directive for a probe into the matter could be due to fears that the opposition could make political capital out of it, especially coming a few months to the general elections.

It would be recalled that it took the Presidency months before it took a decision to probe and later sack the former Secretary to the Government of the Federation, David Lawal Babachir, for alleged diversion of funds.