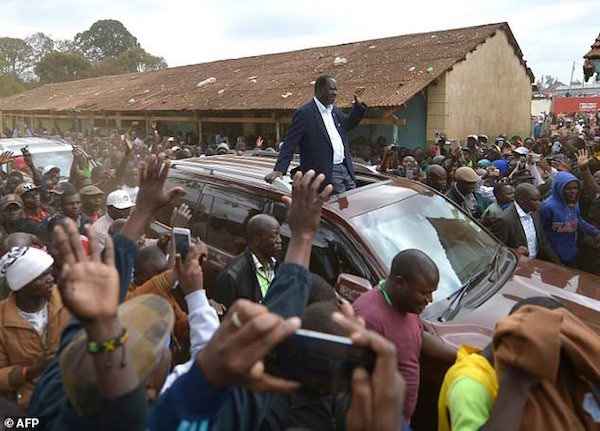 Raila Odinga has been Kenya’s prime minister and longtime opposition leader, but with results in from Tuesday’s general election, it seems he has once again failed to get the one job he’s always wanted: the presidency.

This may very well be the end of the line for the 72-year-old, a mainstay of Kenyan politics since the 1980s, who many think will not run for office again.

However his legacy is at stake, with all eyes on how he will react after claiming Tuesday’s vote was massively rigged, which prompted violent protests in his strongholds.

He has urged calm among his supporters while ominously repeating: “I don’t control the people.”

Odinga’s doggedness is matched among Kenya’s political class only by that of his father, Jaramogi Oginga Odinga, who led the opposition for three decades but never the country.

In his fourth shot at the presidency Odinga felt certain to pull off a victory against 55-year-old incumbent President Uhuru Kenyatta with a newly formed coalition called the National Super Alliance (NASA) that was intended to overcome traditional opposition divisions.

Odinga now finds himself back in a role all too familiar to him: crying foul at a vote he claims was rigged while Kenyatta and his Jubilee party celebrate a second term in office.

Odinga and Kenyatta know each other well, and both men’s fathers did, too. A generation ago, Jaramogi Odinga lost out to Jomo Kenyatta, Kenya’s first post-independence leader.

Born into political royalty, a member of Kenya’s western Luo tribe, Odinga entered parliament in 1992 under the rule of president Daniel arap Moi. He had spent much of the previous decade in prison or in exile during the struggle against Moi’s one-party rule.

He ran unsuccessfully for the presidency in 1997, 2007 and 2013, claiming to have been cheated of victory in the last two votes.

And many observers agree with Odinga’s view that the 2007 election was stolen from him.

To stop the killings, international mediators forced a deal that saw the incumbent, Mwai Kibaki, continue as president, while Odinga took the specially created position of prime minister in a power-sharing government.

He held the post until 2013 when he ran for president, losing to Kenyatta by a very narrow margin — and losing his court challenge of the result.

A decade on, the violence of 2007 still casts a shadow over Kenya’s political landscape and tribal resentment endures.

Odinga’s backers among the Luos believe they are being denied political power by a cabal of elites from the Kikuyus, the same ethnic group as Kenyatta.

In rallies and public statements before the election, Odinga repeated that he was “poised for an outright win”.

When the electoral commission (IEBC) began releasing results that did not match up with that prediction, Odinga was quick to claim rigging, first by alleging hacking of the election system and then fabrication of polling data.

Those allegations were batted away by the IEBC, and international observer missions said they hadn’t found any evidence of manipulation on the level Odinga claimed.

While his supporters consider Odinga a much-needed social reformer, his detractors see a rabble-rousing populist unafraid to play the tribal card.

He is renowned as a firebrand speaker capable of galvanising a crowd with his oratory. But Odinga also has a reputation for being described as stubborn and sometimes short-tempered.

For some observers, he has lost some of his crowd-pleasing skills, which some attribute to ill health and advancing years.

With his speech notes in hand he often stumbles and labours over his words — especially in English. Speaking off-the-cuff in his native Swahili, however, he still has the ability to inspire.

Raised an Anglican, he later converted to evangelicalism. In 2009, he was baptised in a Nairobi swimming pool by a self-proclaimed prophet.

He studied engineering in communist former East Germany and named his eldest son Fidel. He died in 2015, after the Cuban revolutionary.

However, observers say the “socialist” and “communist” labels he was given were more an attempt to discredit him by the Moi regime than an accurate reflection of his leanings.

After returning to Kenya in 1970, Odinga set up as a businessman before following his father into politics.

Nowadays he describes himself as a social democrat who wants to fight inequality.