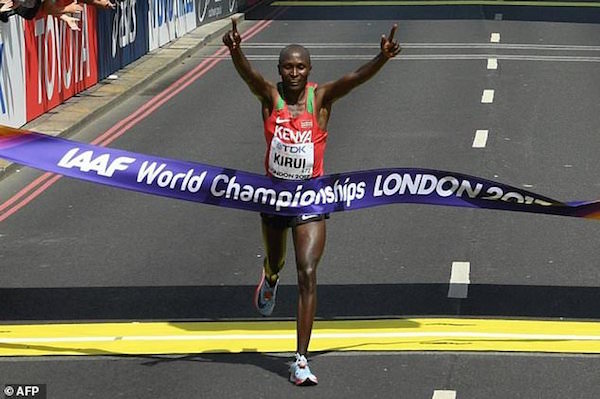 Kenya’s Geoffrey Kipkorir Kirui won the men’s world marathon on Sunday, making up for his country’s podium no-show in the last two championships.

Tola, the Olympic bronze medallist at 10,000m and fastest in the field here with his season’s best of 2:04.11, led the field through the halfway point in 1:05.28, accompanied by Kenyans Kirui and Gideon Kipketer, with this year’s London champion Daniel Wanjiru a couple of seconds back.

At the 1:38 mark, Tola surged to open up a 20-metre lead on Kirui, but the Kenyan gradually reeled the Ethiopian back in and spurted past him to become the fifth gold medallist from the east African powerhouse in the marathon.

Britain’s Callum Hawkins finished fourth in a personal best of 2:10.17, while Kipketer claimed fifth in 2:10.56, a place ahead of Italy’s Daniele Meucci, given the same time, a personal best.