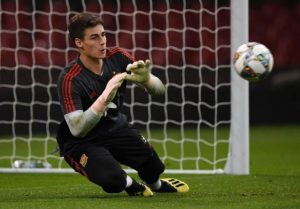 After three straight starts, Chelsea goalkeeper Kepa Arrizabalaga has taken the mantle of Spain’s No. 1 goalkeeper from Manchester United’s David De Gea. According to Spanish publication Marca, the decision likely came from both assistant and interim coach Robert Moreno and Spain head coach Luis Enrique, through mobile correspondence over the past few weeks.

Kepa started at the Faroe Islands in a 4-1 win last Friday for Spain on the road and he’s followed that with a start at home against Sweden. Kepa had made his first start in this run in a 2-0 win at Malta. All three matches have been for Euro 2020 qualification.

The move away from de Gea comes after a number of factors. De Gea has had, by all accounts, a rough season with Man United, especially as the team struggled through the last two months of the Premier League season. In April alone, his three errors in four games cost his team victories, and were so out of character compared with how he had played in the past. It’s as if all the pressure he had absorbed over the years had finally caused the dam to break.

At the same time, de Gea was in goal as Spain finished second in their UEFA Nations League group in 2018, including defeats to both England and Croatia.

At the same time, Kepa has had a very strong season in his first campaign at Chelsea, leading the side to third place in the league and stepping into goal for the UEFA Europa League final. It’s a deserved promotion for Kepa, even if it’s a tough demotion for de Gea.

The Man United goalkeeper, at 28-years old, could still have a future at the national team level. However, he’ll have to be happy to play second fiddle yet again after three years as the Spain No. 1.

CR7 Scores His First Goal For Juventus In 8 Minutes