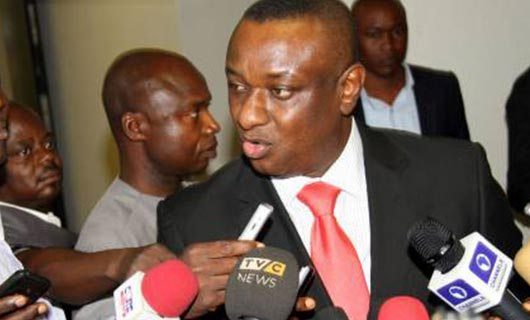 Intersociety: 26th April 2019: Barr Festus Keyamo and others, using a�?the Buhari or APC Presidential Campaign Organization (BCO)a�?; are deliberately undermining and distracting the proceedings of the Presidential Election Tribunal though media trial or regular media noises. This must be stopped and discontinued henceforth. The media trial by the named has risen to an apogee with capacity to undermine or rob Nigerians of justice being sought, if unchecked.

The Atiku/PDP Presidential Campaign Organization and its media warriors are also not helping matters by synchronously and asynchronously being more on the pages of newspaper or on electronic media chat sites than in court-room. Both the antagonist (Keyamo and his BCO) and protagonist (Atiku/PDP Presidential Campaign Organization) have chosen to dance naked in media market square, instead of concentrating on their court cases in the court-room and allowing the Presidential Election Tribunal free hand and space to operate including conducting and concluding its proceedings with popular verdict within the stipulated time frame of 180 days or six months.

It must be put on stainless record that proceedings of the Election Petitionsa�� Tribunals or Panels all over the democratic world are strictly conducted within the confines of stipulated rules guiding court-room and outside court-room utterances including media reports and comments from specialist (i.e. lawyers) and non-specialist (i.e. plaintiffs and respondents) parties to the case or cases in such tribunals.

The rules guiding the Election Tribunals are so strict and punitive that lawyers, groups, individuals and even the judges or tribunal members are forbidden from openly (outside court-room) discussing matters before the electoral courts, except during proceedings or after substantive or preliminary rulings or in filing or responding to applications/motions or after filing substantive, preliminary or cross appeals. Unguarded utterances or remarks regarding matters in courts including electoral courts are called a�?contempt of courta�?, which goes with a string of sanctions or punishments, beginning with Judgesa�� motions or when Judgesa�� attentions are drawn by the protagonist or the antagonist parties in the courts.

In the area of media coverage of the proceedings, the proceedings must be accurately reported and views of the participating judges and lawyers correctly quoted or reported without concoction or doctoring. Anything in the contrary is severely frowned at and punishable by the affected electoral courts, which may include issuance of bench warrant and imprisonment. Lawyers are also not immune or exempted from such punishment or sanction as they can face a string of sanctions depending on the existing rules or practices.

In the area of monitoring or observation and evaluation of the electoral court proceedings by democracy, rights and justice advocacy NGOs, such must also be strictly done within the confines of the stipulated rules guiding the proceedings. The NGOsa�� advocacy roles are legitimately unquestioned once they are done by way of raising credible public alarms to safeguard the integrity, independence, impartiality and credibility of the courts, their judges and proceedings as well as verdicts or outcomes.

In matters of letter writing done in furtherance of such monitoring and evaluation advocacy, especially in the case of Nigeria, the participating NGOs, which must be informed and credible; do so by writing (rarely) the Chairmen or Presiding Judges of such Election Tribunals, especially when some parties engage in activities capable of undermining and distracting the courts or their judges including their integrity, independence, impartiality and credibility.

The most credible and safest method of exercising oversight roles over the electoral courts and their judges, so as not to incur a�?contempt of courta�?, is by writing to the appointing and supervising authorities including the President of the Court of Appeal (PCA) or Chief Justice of Nigeria (CJN); which must be friendly. These are all aimed at refraining from undermining and distracting the judges, their court proceedings and outcomes or verdicts.

As mark of respect for rule of law in Nigeria including the need to allow the 2019 Presidential Election Tribunal a free hand to proceed except when our advocacy intervention is strictly and unavoidably required, Intersociety wishes to restrain itself from joining issues with Barr Keyamo and ors, but seriously cautions and warns them to desist from undermining and distracting, further, the proceedings of the Tribunal and let its proceedings proceed popularly, democratically and constitutionally.

Finally, Barr Keyamo and ors must desist from usurping the duties, functions and powers of INEC. Specifically, by its recent panicky petition to security agencies including the countrya��s domestic intelligence police (SSS), alleging a�?hacking of INECa��s websitea�?, the BCO led by Barr Festus Keyamo and ors has usurped and taken over the duties, functions and powers of INEC. It has now risen from unregistered body to falsely deem itself as a�?constitutionally established Federal Body created by Section 153 (f) of the 1999 Constitutiona�?.

Contrary to Barr Keyamo and his BCOa��s false position that proceedings of the a�?Presidential Election Tribunal are conducted according to the Electoral Act of 2010 with 2015 Amendment onlya�?, proceedings of the Election Petitionsa�� Tribunals in Nigeria including those of the 2019 Presidential/National Assembly and Governorship/State Assembly Election Petitionsa�� Tribunals are generally conducted above the confines of the 2010 Electoral Act as amended; to include the Election Petition Procedures (including practice of front-loading, etc), the High Court or the Appeal Court or the Supreme Court Rules (as case may be) and the Evidence Act of 2011.

It may further interest Barr Keyamo and ors to know, if they pretend not to, that the Evidence Act of 2011 is now one of the ICT compliant Laws of the Federation of Nigeria; guiding the tendering, admissibility and cross-examination of evidence both in the civil and criminal proceedings and trials in Nigeria.

Also as far back as 2004/5, the respected Nigeria Police Forensic Expert, Mr. Solomon Kolawole, was subpoenaed and allowed to testify as a�?amicus curiaea�? (friend of the court/expert witness) in the then Anambra State Governorship Election Petition Tribunal headed by Mr. Justice Garuba Nabaruma; to expertly distinguish between living votes and dead votes.