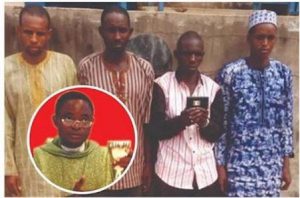 The two surviving kidnappers of a Catholic priest, Fr. John Adeyi, have been sentenced to death by hanging by a Makurdi High Court.

Adeyi, the Vicar-General of Catholic Diocese of Otukpo and Parish Priest of Catholic Church, Okpoga, was kidnapped by gunmen in 2016.

The cleric was later killed and his body dumped in a farm near Otukpo.

However, four kidnappers were arrested by the Intelligence Response Team led by ACP Abba Kyari few months after, but two of them later died in custody in unexplained circumstances.

In a verdict on Wednesday, the court found the two surviving suspects guilty and handed them the death sentence.

“My unit, IRT has recorded her first death conviction since inception in 2015,” he posted.

The family of the late cleric applauded the judgment in a statement, but noted that the development reminded them of the sad loss of their son. It is gratifying, however, to know that the culprits did not go unpunished. May the soul of Fr Adeyi continue to rest in perfect peace with his creator,” the family stated.

Police To Dock Dino Melaye, 4 Rearrested Suspects In Lokoja On May 10

26 thoughts on “Killers of Benue Catholic priest sentenced to death”