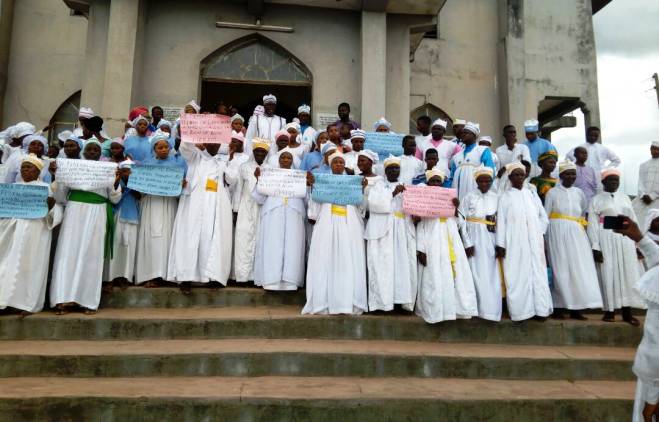 Members of the Eternal Sacred Order of the Cherubim and Seraphim (ESOCS), Yewa Provincial Headquarters, Ilaro, Ogun State today stage a protest against killings across Nigeria. This is in response to the latest bloody incidents in Benue State, CAN declared what it tagged as a a�?National and International Sunday of Christian Protest,a�? to draw global attention to the unabating violence, mass murder and general insecurity across Nigeria.

Elder a�?Biodun Sanyaolu who is the National Treasurer of OAIC and the National Director of CAN while addressing the gathering vehemently rejected the violent activities of the Islamist terrorist group, Boko Haram and the marauding Fulani herdsmen in Nigeria.

The National Director of CAN, therefore called on Federal Government under the leadership of President Mohamadu Buhari to act swiftly to put an end to the killings, he also advised the Federal Government to rise up and perform its constitutional responsibility of protecting citizens, adding that no excuse should be given for the wicked act and perpetrators should be brought to book.

Prayer was offered to give the bereaved family in the affected areas the fortitude to bear the loss.

Eternal Sacred Order of the Cherubim and Seraphim (ESOCS),