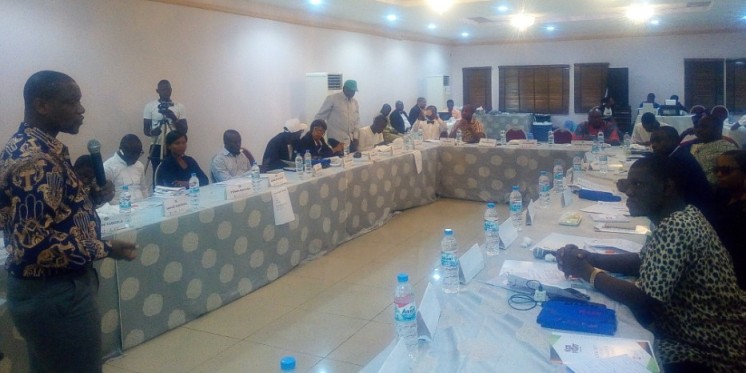 A youth-based non-governmental organization promoting democratic governance, youth development and policy advocacy, Kimpact Development Initiative (KDI) has organized a civic and voters' education workshop for journalists in Osun State ahead of the September 22nd governorship election in the state.

Journalists drawn from print, broadcast and online media across the state attended the workshop tagged “Vote Not Fight: Election No Be War” which was supported by National Democratic Institute (NDI).

The Executive Director of KDI, Mr Bukola Idowu said the training was aimed at sensitising the people of the state to vote peacefully and shun any tendency that could cause fight or any form of crisis before, during and after the election.

Idowu said the 'Vote Note Fight: Election No Be War Campaign' is geared towards educating and mobilizing voters across the nation with immediate attention on Osun ahead of the forthcoming gubernatorial election in the billed for 22nd of September 2018.”

He said KDI is a non-partisan, youth initiated and youth-centered campaign that promotes peace.

His word “The sole aim of this campaign is to enlighten the youths and enhance their commitment to desist totally from every act of violence during elections, beginning with the imminent one in September.”.

Idowu said the VNF campaigned seeks for active participation of the youths of Osun in the electoral process and to shun violence during election period.

“The activities of the VNF campaign dates back to the 2015 general elections during which we have been closely working with the youths and other political actors to ensure peaceful political process in Nigeria as a whole”, Idowu said.

He added that the objectives of the “Vote Not Fight Campaign was to increase measurably voters turnout and peaceful participation of youths in the 2018 Governorship Election in Osun State and beyond.

He also said that the campaign was aimed at increasing non-violent youth engagement with political candidates and stakeholders on prevailing issues ahead of the forthcoming election.

He added that the campaign was also intended to promote the involvement of young women and young persons with disabilities in the 2018 gubernatorial election in Osun State.

Idowu said part of the objectives of the campaign was to create awareness among the youths on the immense importance of voting right without fear or favor in the 2018 Governorship election.

In presentation, Mr Dare Adeoye, the Zonal Coordinator of Legal Defence and Assistance Project gave the overview of electoral violence in Nigeria and analyzed security threats in Osun ahead of the September election.

The INEC Head of Department, Directorate of Voter Education and Publicity, Mr AKin Ojewande also made presentation on electoral communication and conducting an effective voter education.

Ex-Boko Haram "Intelligence Chief" Speaks From Detention On The Reason Albanerwi, Nur And Other Commander Split From Shekau