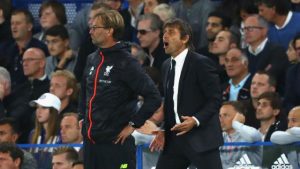 Chelsea head coach Conte lamented the fact Liverpool had a day more to prepare, while his side made an 8,000km round trip to Azerbaijan, following their respective Champions League fixtures.

Although Klopp stated he understood the difficulty of Conte’s predicament, he said the difference in preparation time would not be impactful when the two face each other at Anfield.

“I really get what Antonio is talking about, I heard about it, but maybe he forgot they had the best Christmas schedule last year,” Klopp said.

“Everyone played every two days and they had 12 days to play three games. It is the same situation this year and I don’t know how the Premier League will explain it.

“I really think recovery for a team is important and he is right, but it will not have an influence on this game. Maybe the next one, that is possible.”

Although Liverpool have not seen defeat since last month’s 4-1 hammering at the hands of Tottenham, their defensive struggles once again came to the fore midweek, surrendering a three-goal lead in Tuesday’s 3-3 Champions League draw with Sevilla.

Saturday’s clash with Chelsea could prove pivotal in Liverpool’s hopes for a Champions League spot next season, but Klopp maintained his side do not have the upper hand.

“Now they [Chelsea] are already back, they flew back to London and have two days to recover and that is a normal situation,” he said.

“Three days is never a problem, two days is a big problem but obviously nobody wants to hear that.”