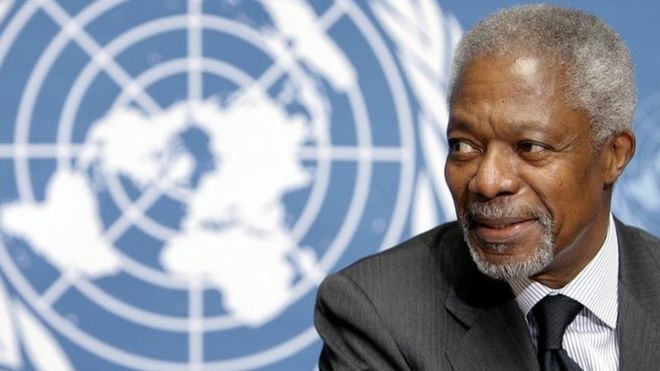 He “passed away peacefully on Saturday after a short illness”, the foundation named after him said on Saturday.

Annan was the first black African to take up the role of the world's top diplomat, serving from 1997 to 2006.

He later served as the UN special envoy for Syria, leading efforts to find a peaceful solution to the conflict.

In a statement announcing his death, the Kofi Annan Foundation described him as a “global statesman and deeply committed internationalist who fought throughout his life for a fairer and more peaceful world”.

“Wherever there was suffering or need, he reached out and touched many people with his deep compassion and empathy. He selflessly placed others first, radiating genuine kindness, warmth and brilliance in all he did.”

The diplomat, who was originally from Ghana, died in the Swiss city of Geneva, where he had been living for several years.

He was awarded the Nobel Peace Price in 2001 for helping to revitalise the international body.

His tenure as UN secretary-general coincided with the Iraq War and the HIV/Aids pandemic.

Kofi Annan described his greatest achievement as the Millennium Development Goals which – for the first time – set global targets on issues such as poverty and child mortality.