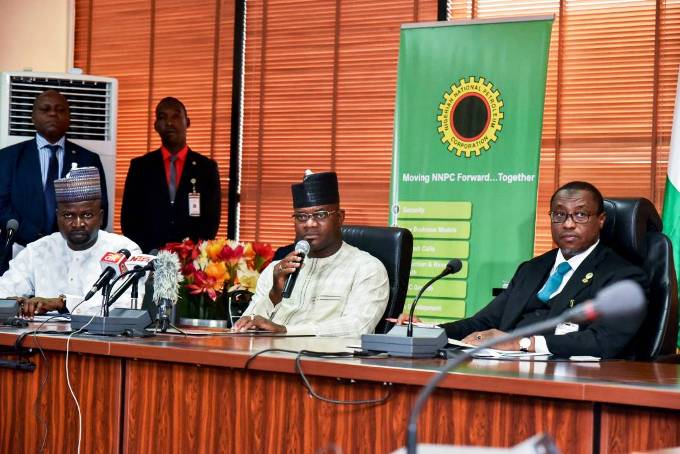 The Kogi State Governor, Alhaji Yahaya Bello, has assured the Nigerian National Petroleum Corporation (NNPC) of complete security for their investment in the Alape Staple Crop Processing Zone situated in Kabba/Bunu Local Government Area of the State. He said this at the NNPC Tower, Abuja, while making his remarks on Tuesday, 27th February, 2018, at the Memorandum of Understanding signing ceremony between the NNPC and the Kogi State Government for the “Cooperation in the Promotion and Development of Biofuels Project.”

Governor Bello said the era of calling Kogi State a “Civil Servant State” is officially over as this project is expected to create about two million direct and indirect jobs as the internally-generated revenue would surely grow exponentially. He thanked the NNPC top management staff and all the investors for choosing kogi and promised that “the investment would be well secured.”

“I have the mandate of the good people of Kogi state that your investment and personnel would be well secured. We inherited a state that was largely insecure 24 months ago. Today, Kogi is the most secure place to invest as far as this country is concerned.

The Governor further explained that the Africa Development Bank is poised to finance all the infarastrucure needed to make the Alape Staple Crop Processing Zone a success.

In his welcome remarks, the Group Managing Director of the NNPC, Dr. Maikanti Baru, said the occasion marked another major milestone in the present Federal Governmenta��s determination to diversify the economy and at the same time compliments Nigeriaa��s effort in meeting with the growing energy demand.

“NNPC is committed towards the implementation of Nigeriaa��s Nationally Determined Contribution (NDC) under the Paris Agreement aimed at combating global Climate Change, to which Mr. President, Muhammadu Buhari signed, and deposited Nigeriaa��s ‘Instrument of Ratification’ to the United Nations Framework Convention on Climate Change (UNFCCC) in May 2017,” he said.

“The Renewable Energy Division of NNPC was created in line with Federal Government directive with the sole aim of industrializing Agriculture in Nigeria through the commercial production of Biofuels from selected Energy Crops as feedstock, while fostering the exploitation of other Renewable Energy Sources; mitigating Climate change and earn Carbon credits from CDM Projects Activities and serve as additional line of profitable business for NNPC, including Food Production and Power Generation

Diversification of NNPCa��s business portfolio and serve as a credible source of additional income for the corporation.”

Dr. Baru said in order to address the food security issues associated with producing 1st generation Biofuels, the Nigerian Biofuels Policy had carefully selected Energy Crops as Feedstock to be developed on large-scale green fields and Out-growers scheme, using improved high-yielding varieties. This would ensure Fuel and Food production as well as land-use optimization, and minimize to the barest minimum the impact on food production.

“The NNPC is pleased to know of another opportunity in the Alape Staple Crop Processing Zone (SCPZ), a vast Agro Allied business opportunity which provides suitable agronomics for the cultivation of Sugarcane, Cassava and Oil Palm.

“The signing of this MoU with the Kogi State Government will spearhead the furtherance of pre-project engagements, which hopefully will lead to the formation of a Special Purpose Vehicle (SPV) to steer the future activity of the proposed project.”

Dr. Baru said that apart from the two million jobs to be provided, the project is central to the attainment of economic development on the basis of value-added investment portfolios, environmental sustainability, Climate Change mitigation, wealth and job creation to reduce the poverty index, while balancing the ecosystem, and maintenance of national and global security.

“The proposed NNPC Biofuels project in Kaba/Bunu, Kogi State will be modeled to be an integrated Feedstock Plantation and Process Plants Complex on land covering a total of 20,000 hectares for sugarcane and or 15,000 hectares for cassava with potentials for further expansion.

According to the GMD, the project to be constructed in the Complex under a Zero-Waste Concept, and the Services thereof include, but not limited to the development and provision of: Sugarcane Feedstock Plantation: 19,000 hectares; Cane Mill and Raw/Refined Sugar Plant: 126,000 tons/year; Fuel-Ethanol Processing Plant: 84 million Litres/year; Bagasse Cogeneration Plant: 64 Megawatts; Carbon Dioxide Recovery and Bottling Plant: 2,000 tons/year; Animal Feed: 63,000 tons/year; Organized Out-Growers Scheme; Clean Development Mechanism Projects Activities under the UNFCCC and “Other appropriate Utilities/Services.” This is to provide about 1 million direct and indirect jobs.

This as well will provide 1 million direct and indirect jobs. The plant has a gestation period of 36 months.

The Kogi State Commissioner for Finance, Mukadam Asiwaju Asiru, said the state government is excited to be hosting such a huge project and the added revenue that would come with it.

“Our joy is that this massive project is coming in the time of the New Direction administration of Governor Yahaya Bello and we are most happy to be proving doubters wrong. We are sure that this project alone will secure the future of most of our youth and the health of our state purse,” he concluded.