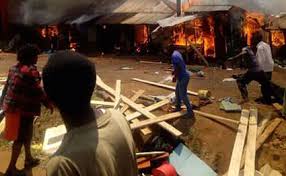 Delta State governor, Ifeanyi Okowa, has assured traders that his administration would give succor to them to enable them rise up to their feet again.

This is coming on the heels of the burnt part of some shops along Izupe Road in Eke Market, Kwale area of the state in the early hours of Wednesday which burnt down five shops.

The governor who was represented by the Commissioner, Bureau for Special Duties, Ernest Ogwizzy, said shortly after inspecting the burnt portion of the market that the state government would not close its eyes to her citizen, hence the early response.

Speaking to newsmen, Ogwizzy noted, a�?the extent of damage as I have witnessed so far, is very colossal and I dona��t know how to estimate the level of damage caused by this inferno but all I need to say is that it was a big losta�?, he regretted.

He said the governor has always shown concern to those affected by one natural disaster or the other a�?by sending one or two things either financial or materially to bring succor to them and that government intend to do in this circumstancea�?.

He advise the victims and other shop owners to always guard against fire, a�?and they should at all-time provide fire extinguisher from https://mrfireextinguisher.com in their shops and residence so that when these things happens, people can easily trigger them to combat the fire before fire fighter will come. Because assuming there were to be any fire extinguisher at the external parts of this building, any other person who is just passing-by, can operate it and the level of inferno wouldna��t have been this mucha�?, he cautioned.

A chief in the community, Chief Ejechi Dennis, who narrated the ordeal said, he alerted the fire service at about 5:05, a�?to God be the glory but for Delta State fire service, the entire street would have been burnt down. They came promptly and they rescued the situation that is why we have this minimal casualtya�?, he explained.

He used the opportunity to thank the fire service and the state government for their prompt response and appealed to government at all levels, SEMA and NEMA for assistant to the victims whom he said needed help, a�?the man selling and repairing generators have nowhere to stay, the man selling foams is as good as gone even the other woman selling provisiona�?.

The foam dealer, Mr Emmauel Okebu, who narrated his own ordeal said he was doing his morning devotion when he received calls on the inferno on his shop, explaining that he emptied his Zenith bank account to stock the shop on Monday and Tuesday before the fire razed it on Wednesday, a�?which I have never done before, it is about N20, 00 that is left in the account nowa�?.

He said he deals on plastic chairs, foams mattresses, adding that he is a mini distributor to Muoka Foams.

The owner of the provision store, Monica Odibi noted that she lost over N12 million to the inferno.

N400 m fraud: I can't remember any dealings with Metuh on that subject, says Dasuki