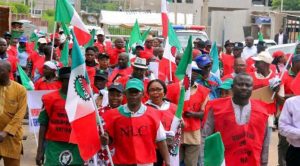 President of the Nigeria Labour Congress has said that the labour will not be deterred by the court order in going ahead with its nationwide strike action planned to commence on Tuesday November 6.

Labour unions in the country have slated the industrial action to press for N30,000 minimum wage.

Waba was reacting to the order by Justice Kado Sanusi of the National Industrial Court in Abuja that the strike action be shelved, pending the hearing of a suit before the court.

The NLC president is insisting that the joint Central Working Committee (CWC) would stand by the resolution of the national executive council to begin indefinite industrial actions from November 6, except the government accepts and begins the process of perfecting the payment of N30,000, as negotiated, before that date.

Justice Sanusi Kado gave the order in a ruling on an ex parte application moved on behalf of the federal government by the Solicitor-General of the Federation and Permanent Secretary, Federal Ministry of Justice, Dayo Apata.

He ordered that the processes be served on the defendants in the suit, which are the Nigerian Labour Congress (NLC), the Trade Union Congress (TUC) and the Incorporated Trustees of the Nigerian Governors Forum.

Ruling on the exparte application, the judge agreed with the submission of the Solicitor General of the Federation (SGF), Dayo Apata, who filed the suit on behalf of the government that the planned strike, if allowed to go on, would have grave consequences on the economy and the people, particularly those in urgent need of medical care. He subsequently adjourned till November 8th for hearing of the main suit.

However, following its failure to reach a compromise with the government, the Organised labour had announced that starting from November 6, it would embark on an indefinite strike to press home its demand for an upward review of the current minimum wage of N18,000 monthly pay.

It initially demanded for N65,000, but following various meetings with the representatives of the government it was reduced to N30,000. Meanwhile, there has been a stalemate, as the federal government on its part insisted on paying only N25,000 while the states government claimed they cannot go beyond N22,500.

The stalemate therefore prompted labour to call for an the indefinite strike until their demands were met.

Wabba, who spoke in Lagos, urged Chairman of the National Minimum Wage Tripartite Negotiating Committee, Ama Pepple, to submit the report of the already concluded National Minimum wage negotiation to President Muhammadu Buhari for transmission to the National Assembly for consideration and passage into law.

The labour leader, who addressed a media briefing organised by the joint Central Working Committee (CWC) of all registered trade unions in Nigeria, noted that the joint CWCs of organised labour in the country “considered the recent mischief by government as an attempt to impeach the outcome of the concluded new national minimum negotiation.

“It was resolved after taking the report of organised labour of what transpired at the tripartite minimum wage negotiating council committee that if government fails to respond and address the issues of making sure the report is signed and submitted to President Buhari and him putting in motion processes that would transmit a bill to the National Assembly, enactment of a new national minimum wage, certainly, the National Industrial action will commence by November 6 by midnight,” he noted.

Wabba recalled that the minimum wage was due since 2016, but that they were committed to a process of collective bargaining while workers and unions were patient. He explained that the issue of minimum wage was at the heart of every worker, adding that they had suffered monumentally in terms of purchasing power from the value of N18,000 to the value that they had now, “therefore the issue is very central.”

According to him, “We dialogued and also negotiated in line with Convention 87 up to a process of taking us more than one year, and at the conclusion of the meeting when workers are expecting to benefit from the minimum wage, all these issues are coming up.

“The demand is very straightforward, we are open to dialogue, but dialogue must have an end. If we must have dialogue for one year and there is no end to that, certainly there is deceit, and we are not ready for that, we will not actually participate in a process that will not have an end. This is where we are now and it is unambiguous that a worker who creates wealth needs to be taken care of.”

However, Minister of Labour and Employment, Chris Ngige, said that conciliation on the national minimum wage wouldcontinue on Sunday despite the court injunction restraining organised labour from embarking on strike.

The minister in the statement, said that the conciliation meeting involving organised Labour, the organised private sector and government scheduled for Sunday remain unchanged.

“The conciliation meeting involving the Organised Labour, the Organised Private Sector and Government scheduled for Sunday, Nov. 4 at the Office of the Secretary to the Government of the Federation by 6 p.m. is still on course and will hold,'' he said.

Mr Ngige said this would be followed by another meeting of the National Tripartite Minimum Wage Committee meeting on Monday, November 5 at the same venue.

The minister appealed to all tripartite members to attend the meetings in the interest of the nation and finding a solution to the minimum wage impasse.