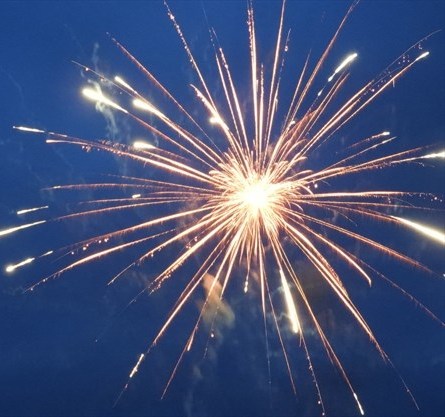 Fireworks are not new to Lagosians, since the 90's they have been integral parts of almost every festivity. December is usually the month for knockouts and fireworks, from December 1 to almost mid-January, kids would throw knockouts on the streets , adolescents would shoot fireworks in the air. The more we get towards Christmas the louder they become, some areas on the mainland become war zone with blasting sounds, while those on the island maintain their superficial calm.

Lagosians amidst several reasons are considered as elite, with distinctive traits that ordinarily separate them from people living in other part of the country, these characteristics have been tagged as “survival hints”, “Lagos way”, among many others, but in this seemingly unity there is a very huge dichotomy, that affect how people living in different part of Lagos are suppose to react to issues. “The Lagos Mainland and the Lagos Island Life”, it also affects their reaction when the issue like fading fireworks is raised.

The climax is usually expected to be December 31st both in Lagos Island and Mainland with a more propelling sound from every quarters like a war territory, those who keep vigil this night would usually find it so harmful to access their homes. Teenagers who can handle the knockouts well use them often to terrorize passerby.

The sound of fireworks are fading in Lagos, today the narratives are different, it has not been a one-sided growth, but an holistic one taking its strength from various factors and incidents. In 2012 a building that stored firecrackers, knockouts and fireworks in Lagos Island gut fire, it led to the death of an 11-year-old boy. The then Govenor of Lagos State, Babatunde Raji Fashola was remembered to have tagged it as “another self-inflicted tragedy”. This incident is one out of many others that never gets to be reported.

Several measures have been taken to enforce and discourage the use of uncoordinated fireworks. In 2015, Lagos State Government charged parents and guardians to caution their children to desist from using fireworks popularly called 'banger' during the festive period. Law enforcement agencies have been mobilized to arrest offenders within the ambit of the law. The ban has been functional along other bans to compel a better Lagos. More needs to be done to further sustain this effort and bring more defaulters to book.

Lagos is changing. When statements like this are made, you are tempted to ask in what aspect? Can there be uniformity in how people from diverse origin behave? The gravity of this change should is a slow steady one with many actors playing active roles.

Beyond these statutory efforts, there is an obvious fact that the fading sound of fireworks in Lagos can be traced to the changes experienced in the state, with social equalizers like education, and the internet creating a uniform sense of responsibility that reflects in almost every sector of Lagos today.

Book Review: A New Anthology on African Perspectives of Feminism is out

Imo People, About Making Another Mistake

19 thoughts on “Lagos and The Fading Sound of Fireworks”