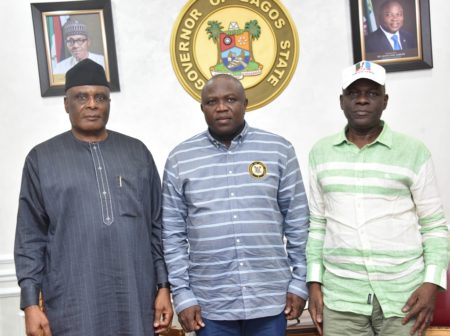 The Electoral Committee of the Lagos APC governorship primary and stakeholders in the state chapter, on Monday came out of a meeting without agreeing on the pattern to adopt for the election on Tuesday.

The Speaker of the state House of Assembly, Mr Mudashiru Obasa made the disclosure to newsmen on Monday, after a meeting between the committee and state party stakeholders in Lagos.

The News Agency of Nigeria (NAN) reports that the Chairman of the electoral committee, Mr Clement Ebri, led his team to the meeting which was also attended by the majority leader of the House of Representatives, Mr Femi Gbajabiamila, the state party chairman, Alhaji Tunde Balogun and other party officials.

Obasa said that the disagreement stemmed from the insistence that the committee wanted the use of ballot papers for the primary as against the choice of open direct primary by the state stakeholders.

He said stakeholders in the state rejected the use of ballot papers, contending that it was not possible to train members on its use before the election.

Obasa said since the open direct primary system, where members queue behind their preferred aspirants was successfully used in the presidential primary in the state, it would also be suitable for the governorship primary.

“The meeting was held between members of the state House of Assembly and other stakeholders with the committee, and we were briefed about the coming primaries in the state.

“They told us that the directive from Abuja was that they should use ballot papers for the election.

“But we as stakeholders have rejected the idea because we have earlier informed our members on this.

“So, our consideration at the meeting was that if they aim to adopt the use of ballot papers, there is no time to train officials and party members on the new strategy the primary would follow.

“We told them that here in Lagos, we stand for open direct primary.

“We also told them that the presidential primary in the state was conducted in the same format.

“They then told us the outcome of the meeting will be sent to Abuja and response would be conveyed to us.

“I am not sure what the outcome will be, but I believe they will yield to our stand,” he said.

Asked if both parties would agree before the primary, the speaker said he was not sure.

He, however, expressed the optimism that the primary would hold as scheduled.

On the primary held in some parts of the state, Obasa said the results would be cancelled.

He, however, said that the election held because party members were ready to participate in the process.

Ebri, in his brief remarks, assured that the primary would hold as scheduled.

He said the committee interacted with stakeholders on the ways to ensure the process was credible.

“We discussed the basic principles of the guidelines for the primary.

“The primary will hold tomorrow. For you to participate in the primary, you have to be a member of the party, and you have to have your membership card, and your name must be on the register.

“If you don’t have a membership card and you have a slip, and your name is on the register, you will vote ” he said.

The Lagos Chairman of APC, Alhaji Tunde Balogun, who also spoke with newsmen late Monday, assured that the primary would finally hold tomorrow.

He said the party had concluded all arrangements to ensure its successful conduct.

Balogun said the format would be option A4, where voters queue behind the photographs of their preferred aspirants.

He said that members with the party ID card will be allowed to vote .

Accreditation starts by 9 and ends by noon, while voting starts immediately after.

The incumbent governor, Mr Akinwunmi Ambode will slug it out at the primary with Mr Jide Sanwo-Olu, a former commissioner in the state.

Sanwo-Olu is going into the primary with endorsement by leading members of the party, which Ambode claims is an unfair advantage.

Ambode had urged the National Electoral Committee to ensure fairness by conducting a credible primary.

The primary, earlier scheduled for Monday, was shifted till Tuesday.