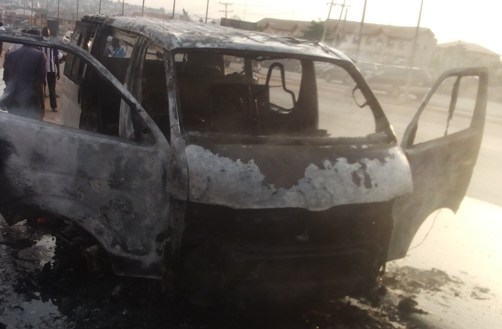 It was indeed a dramatic midnight yesterday in Awka as landlord set his tenant’s shuttle (bus) ablaze and vanished into darkness, locking other tenants inside their apartments close to the burning shuttle.

The terse theatrical which took place at exactly 12 am (December 1) was said to had dreadfully injected great phobia in the minds of virtually all the tenants residing around the Oby Okoli Avenue, Unizik Temp-Site Awka in Anambra state.

Four repeatedly thunderous detonations which accompanied the ferociously burning fire was said had dreadfully injected great phobia in every corner of the entire neighborhood as they immediately scrambled out for the fear of being roasted in their beds, as the fire nearly escalated into houses.

According to an eye witness who simply identified himself as Chisom, the cantankerous landlord, for a long time, had been nursing a soured feeling of animosity towards the innocent tenant and his family, for nothing milder than greed and cupidity.

Recounting his ordeal and encounter with the landlord since he parked into the house with his family, the tenant Onyebuchi narrated how they had once been a victim of “shitbath”as the landlord and his family contributed a full bucket of shit (feces), mixed with hot urine and water, then sneaked into his (the tenant’s) room where he was enjoying his night rest with his family, and emptied the bucket of shit on his face, together with his wife and little kids.

When asked the what genesis of the problem was, the young industrious tenant who described the shuttle as his only means of fending for his familyfamily and paying his childrens’ school fees, noted that, humbly, he had always approached the landlord time without number to find out what the problem was, but never got any answer, rather than more harms.

“My house rent has not expired; it will expire in February 2018, and so I’m not owing him anything; I have never spoken or done any evil against him, I have never stolen anybody’s thing, I always keep my apartment cIean, and I do not even come back in the late hours” the innocent tenant confessed.

The landlord who committed this was said to had disappeared into the thick darkness, even as others who immediately rushed to the arena to celebrate the new Xmas with their eyes confessed that they saw him running shoelessly towards the Cofi axis of the Geogold Road, not knowing that he was the chief character in the play which they were rushing to watch, having been attractedattracted from afar by the gleaming flames of the burning fire and the thunderous detonations that accompanied it.

All the effort made to reach the landlord who is also a tanker driver, through phone, proved abortive, even as his wife denied his husband’s responsibility for such horrendous act, claiming that he (the landlord) has never been at home for days now.

As at the time of filing this report, the landlady and the tenant Onyebuchi are currently in the police custody, pending the outcome of the ongoing investigation.