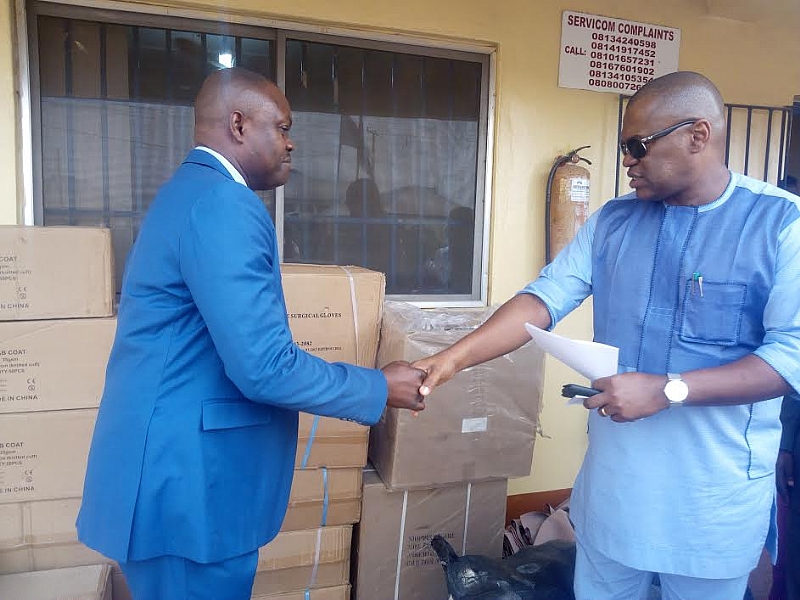 In its determination to effectively curtail the outbreak of Lassa fever scourge in Delta State, the State Government has donated personal protective items to the Management of the Federal Medical Centre (FMC), Asaba as part of its collaborative efforts to address the spread of the disease.

The state Commissioner for Health, Dr Nicholas Azinge who made the denotation on behalf of the state government Wednesday at the office of the Chief Medical Director, FMC, Asaba said the items would enable the medical personnel in the hospital to effectively fight the disease which has just re-emerged last week in the state.

The Commissioner revealed that so far 2 confirmed cases of Lassa Fever disease has been recorded in the state which were brought to the Federal Medical Centre, Asaba for medical attention.

According to the Commissioner, the first case brought to the FMC, Asaba was that of a 43 year old male resident in the state who was successfully treated and later referred to Irrua Specialist Hospital, Edo State and is responding to treatment.

He said the family members of the diseased and the ambulance driver who conveyed him to the hospital are being closely watched while other contact tracing are on-going.

Dr. Azinge assured Deltans that the relevant authorities are on top of the situation, adding that there is no need for residents to be alarmed since the state was able to effectively handle the disease the last time it broke out.

He said all the Primary Health Care centres in the state have been activated, sensitization activities geared up and advised residents to report any case of malaria and typhoid fever cases that are not responding to treatment to the nearest medical facility as early report of cases will save lives.

The Commissioner said he is in contact with his counterpart in Anambra State regarding the second case which was brought in from Anambra, stating that the corpse would be handed over to his colleague so that proper burial arrangement is carried out in order not to expose more persons to the disease.

Receiving the donated items on behalf of the hospital, the Chief Medical Director, Federal Medical Centre, Asaba, Dr. Victor Osiatuma expressed gratitude to the state governor, Ifeanyi Okowa, for the gesture and assured of the effective use of the items which included 250 pieces of disposable coats and suits, 500 pieces Elbow Length Gloves, 50 packets of surgical hand Gloves, 50 sets of Protective boots, among others.

Explaining the second recorded case of the disease, Dr. Osiatuma revealed that it was that of an adult female who was brought in from Anambra State on Sunday but unfortunately passed on the following day, Monday.

Dr. Osiatuma assured residents on the ability of the hospital to handle the disease stating that with the donated items and training given to their personnel the spread will be effectively curbed.

EXPECT GREAT THINGS FROM THE YOUTH