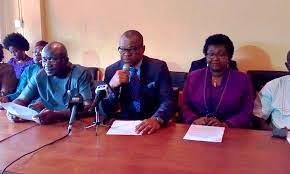 Deltans have been urged not to be perturbed over the reported cases of Lassa fever in Ebonyi and Kogi States which has allegedly recorded fatal cases.

Delta State Commissioner for Health, Dr. Nicholas Azinge, stated this in an interview with newsmen in Asaba.

Dr. Azinge said that the Emergency Response Team comprising the State Epidemiologist, State Disease Surveillance Notification Officer (DSNO) who is the Chief Reporting Officer for the state and the Disease Surveillance Notification Officers at the various 25 Local Government Areas as well as Patrol Health Personnel who look out for the basic signs and symptoms and refer to the nearest Primary Health Centre, has been activated, following from one of the Statea��s measures adopted to contain Monkey pox suspected cases and spread in the State.

He applauded the efforts of the state governor, Ifeanyi Okowa in ensuring that Delta State is free of Lassa fever scourge and/or any other infectious disease that may want to threaten the health and wellbeing of residents of the State.

The Commissioner assured residents of the State of governmenta��s readiness and commitment to a Lassa fever Free State, adding that the various health authorities are fully prepared as they have been taught severally what symptoms to look out for such as coughing, vomiting and bleeding which occurs at advanced stage.

Dr. Azinge reiterated that Lassa fever is a viral disease which does not have cure but is self-limiting, and hence the importance placed on prevention through proper personal hygiene and sanitation which ensures a very low chance of Lassa fever outbreak in the State.

According to the Commissioner, people should not wait for bleeding to occur before seeking medical attention, but be quick to report to any nearby health centre when fever persists after malaria/typhoid treatments, however noting that early detection remains very important.

He commended the Ministry of Environment and the Waste Management Board who are doing their best in ensuring a cleaner environment free of rodentsa�� infestation adding that residents should not leave sanitation to government alone; and called for more sensitization to be done so that residents are fully aware of proper waste handling and disposal.

The Commissioner reiterated that proper sanitation and personal hygiene remains the vital prevention tips which go a long way in blocking possible entries through which rodents, the major carriers, spread the disease by contaminating edibles not properly stored with their urine.