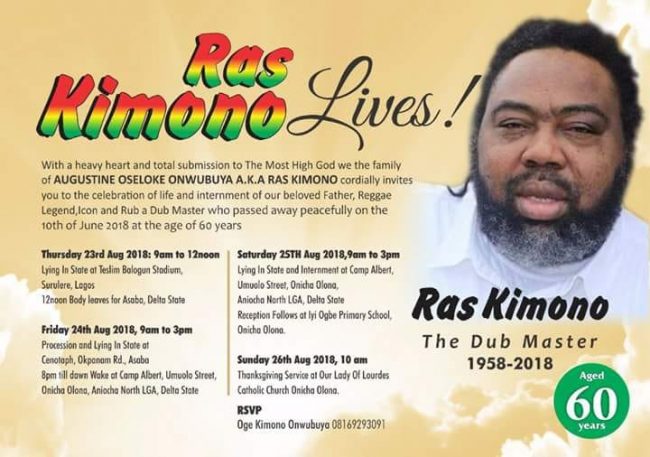 The daughter of late Dub Master, Ras Kimono today announced memorial plans for the late singer, which will take place over four separate days and at two different locations.

Viewing the remains of the late raggae maestro will begin on Aug. 23rd at the Teslim Balogun Stadium in Lagos for Lying in state. The public is welcome to attend starting at 9:00 a.m. and ending at 12p.m, according to Oge Kimono Onwubuya.

There will be a procession and another lying in state on Friday 24th of August at Cenotaph, Okpanam road, Asaba, Delta state, from 9:00 am to 3:00 pm from where a dawn wake-keeping will be held at Camp Albert, Onicha-Olona, Delta State.

The funeral will be held on Saturday, August 25th at the Camp Albert, Onicha Olona. A thanksgiving service will be held on August 26th at Our Lady of Lourdes Catholic Church, Onicha Ilona.The Dub Master died on June 10th, 2018 at age 60.

“I can become a babymama because things are changing” – 46 year old actress, Bimbo Akintola