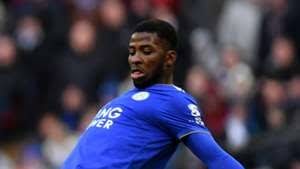 BRENDAN RODGERS blasted Kelechi Iheanacho after the Leicester City striker spurned a golden chance to level the game against his former side Manchester City last night a�� and admitted the player himself knows he should have scored.

An equaliser would have seen control of the Premier League title race swing out of City’s hands and into Liverpool’s.

Now, all City have to do is win on Sunday against Brighton & Hove Albion and they will retain their title.

And former Liverpool boss Rodgers slammed his striker after the game, and admitted that the mistake cost them the game.

a�?He should score, I said that to him afterwards, in the big games there are not many moments,a�? Rodgers said in his press conference.

a�?Ita��s moments when you can come into the game and make an impact, hea��s a great boy, works very, very hard in training.

a�?Hea��s got in front of him a top-class operator in Jamie [Vardy] so ita��s difficult for him to find rhythm. However, it’s moments like that where you can make an impact. Hea��s actually done that in the other games.

a�?It was a big chance for him, the ball was there and it was on his good side. But it wasna��t to be. He got himself in the position, I felt we would have deserved that at least.a�?

Despite suffering defeat at the Etihad, Rodgers insisted that he was still pleased with his team and the progress they have made since he swapped Celtic for Leicester in February.

a�?To come into games like this here and nights like this is what the Premier League is about.

a�?Ita��s a great challenge against guys that are geniuses like Pep and the other great coaches. Pit your wits against them. Thata��s the challenge as a professional coach.a�?

No VAR for keeper encroachment at penalties in Premier League, says PGMOL