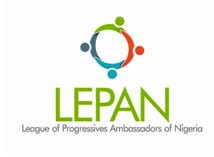 As parts of efforts to ensure hitch-free 2019 elections, the League of Progressive Ambassadors of Nigeria (LEPAN), a non-partisan civic organisation, has advised the Independent National Electoral Commission (INEC) on how to go about achieving rancour-free elections next year. This was contained in a statement signed by the groupa��s publicity secretary, SeunOkegbemiro today in Lagos.

a�?We must first commend INEC for the relative success of the Continuous Voter Registration (CVR) exercise nationwide. From the data available from our field officers monitoring the process in several states of the Federation, the CVR has been a remarkable success even though there are areas that need to be improved.

a�?We feel particularly disappointed with several avoidable logistic failures such as non-functional printers, Direct Data Capture (DDC) machines, and poor staff attitudes toward potential voters and registrants were some of the numerous complaints our field observers reported. We, therefore, urge INEC to ensure these anomalies are corrected so that more Nigerians can register and participate in the democratic process.a�? MrOkegbemiro said.

a�?On our parta�? the statement continued a�?we have offered to get volunteers for INEC if staff shortage is one of the reasons for the seemingly slow registration process which sometimes see a potential registrant spend up to 40 minutes on the average to get registered. This should not be the case in this digital age.a�? The group said.

The group also admitted that there have been a�?technical and political improvementsa�? in the electoral process since the 2015 elections.

a�?We should not forget that there have been some significant technical and political improvements in conducting successful elections under the current INEC management with the conduct of several gubernatorial, National Assembly and state Houses of Assembly by-elections. These elections themselves are not idyllic but simply show we are better than we were about four years ago.a�? The group noted.

a�?We on our part will have preferred a situation where INEC should, by now, be thinking of electronic voting since there have been several opportunities for INEC to test this method with the past few elections but unfortunately failed to do so. If those elections have been conducted using the e-Voting, by now, the fears about multiple voting, ballot stuffing, and post-election violence that accompany major elections would have been minimized, if not wiped away by now.a�? The statement charged.

a�?Our e-Voting proposal is for people to vote via a prescribed machine and same will record their votes and stored digitally through a safe storage medium before being sent to a centralized location (or database) where tabulation programs compile and tabulate results. We understand past attempts have been marred by technical problems such as electronic fingerprint readers malfunctioning on Election Day. We are also aware that there have been several reports of biometric voter systems failures but we insist these problems account for just a little over 0.25% of, say, card readers malfunctioned if data from INEC are anything to go by.a�? Okegbemiro said.

On the recently passed #NotTooYoungToRun Bill, MrOkegbemiro said a�?The #NotTooYoungToRun Bill has become a national emergency. We are using this medium to plead with President Muhammadu Buhari, GCFR, to give his assent to the bill in meaningful time. This is because, the youths will be asking some serious questions during next yeara��s presidential election. We will want to know why, by now, young people who have intentions to contest elective offices cannot do so simply because the president have not given his assent to a Bill that would ordinarily have made them participate actively.a�?

On the bill, the group said a�?We have travelled a long route to get this far. We cannot back down at this point when victory is in sight. This is why we are passionately appealing to all well-meaning Nigerian to join us in urging the president to be part of this epoch making event by signing this bill into law.a�?

a�?While we wait to see INEC and all other electoral actors demonstrate their lessons learnt from some of these past experiences, we as a responsible and responsive organisation will monitor the process and come out with an elaborate report afterwards. We cannot accept anything short of a free, fair, and transparent process.a�?