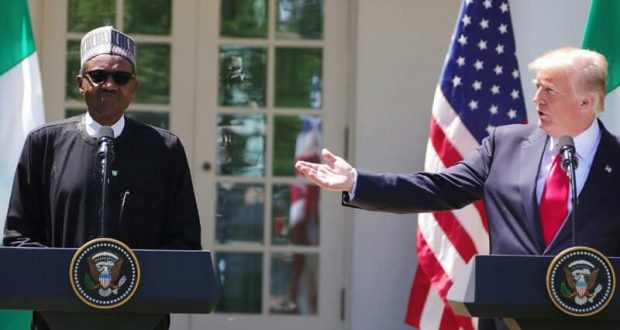 Leta��s give it to him. Buharia��s meeting with Donald Trump was a huge success. Apart from the fact that President Buhari was calm and well-comported in what looked like a meeting of equals, he also spoke well, in a less a�?Hausanizeda�� (or is it Fulfulde?) accent than is usually the case with him. Those who prepared him for the meeting did well. Was the meeting an endorsement of the Buhari presidency? I will say it is a qualified a�?yesa��. The fact that the meeting took place at all despite the damming 2017 Human Rights Report for the country which was released only a few days before the visit, was remarkable. For many American Presidents, that Report would have been enough to give Buhari and his government a wide berth. Apart from Buhari being the first President from sub-Saharan Africa to be hosted by Mr Trump since his inauguration, Buhari was also the first African leader Trump spoke to on phone after his inauguration. Additionally, the sacked U.S. Secretary of State, Rex Tillerson, visited Nigeria in March this year in a first of five-country African tour embarked upon by any official of the Trump administration.

It will however be naive to regard the above warming up to the Buhari government as evidence of endorsement. Trump is totally unpredictable in his trajectory of relationships with apparent friends and foes a�� as we have seen with President Putin of Russia and President Kim Jong-un of North Korea. Did we not think he was such great friends with Putin that Russia was willing to rig the US election in his favour? And did we not think that we were on the brink of another World War when he engaged in militaristic rhetoric with the North Korean leader? A week, they say, is like a life time in politics. And there are still several months to the 2019 election!

Right now no one should begrudge Buhari and his party from enjoying the momentum from that visit. But if I were Buharia��s strategist, I would caution that at this stage in the run-up to the 2015 election, it seemed like a done deal that Jonathan would be re-elected President. You remember the Transformation Ambassadorsa�� of Nigeria (TAN)? They rolled out apparently a�?verifiablea�� signatures of millions of voters from across the country begging President Jonathan to seek re-election. The rest, they say, is history.

Apart from the above cautionary notes, there are other important lessons from Trumpa��s meeting with Buhari:

One, in international relations, nations are driven by their national interest (though given the fluidity of the term, different leaders also invoke a�?national interesta�� to justify their personal idiosyncrasies). For Trump, given his anti-Muslim and anti-immigration campaign rhetoric, some groups in Nigeria like IPOB enthusiastically endorsed him in expectations that he would ally with them to fight their assumed political enemies. But politics does not often work that way. It was the late Mario Matthew Cuomo, the 52nd Governor of New York State, who famously said that politicians campaign in poetry but govern in prose. Though Trump has remained faithful to the core of his right-wing beliefs, he has also shifted grounds and embraced political realities in many respects.

Just as Trump has disappointed those who hoped that he would come and fight their wars, Aisha Buhari, the Presidenta��s wife, also threw under the bus those hoping to make her a rallying point of mobilization against her husband by promoting the hash tag, #IStandWithAishaBuhari. Aisha was critical of Buharia��s mode of governance, in particular of a so-called cabal that she accused of hijacking Buharia��s government. The #IStandWithAishaBuhari was meant to be a movement endorsing those criticisms. I was among those who refused to stand with her on that matter. In an article in this column on February 1 2018, I argued that I would be disappointed if Mrs Buhari re-tweeted any of my articles critical of her husband because I would not tolerate such from my wife. On April 30, 2018, after Buharia��s meeting with Trump, Aisha tweeted: a�?Dear President, you deserve some accoladesa�? and posted photos of her husbanda��s meetings with President Trump. Good one Mrs Buhari!

Two, while Trump is quite unpredictable as President, he appears consistently fascinated by a�?dealsa��, and constantly talks of offering countries a�?dealsa�� a�� a term commonly used by business people, but rarely by politicians or Presidents. Trump usually imagines himself as the ultimate dealmaker so only himself probably knows what deal he had in mind by meeting with Buhari and agreeing to sell 12 high-tech aircraft to Nigeria in the fight against Boko Haram despite the damning 2017 Human Rights Report (the Obama government declined to sell such hardware to Nigeria on similar human rights concerns). Ordinarily such reports are used to brief American Presidents when they meet foreign presidents and dignitaries and it is doubtful whether any other President would have even invited a President who had received such a damning report to the White House. What was Trump up to by agreeing to those sales? Perhaps we can get a glimpse of the answer from this quote from his 1987 book, The Art of the Deal: a�?I never get too attached to one deal or one approach. For starters, I keep a lot of balls in the air, because most deals fall out, no matter how promising they seem at first.a�?

Three, never judge a book by its cover. In the run-up to the election of Barrack Obama as the first Black President of the USA in 2008, Africans were literally falling over themselves to offer him support as our a�?cousina��. With an African father from Kenya, we appropriated him as a fellow African who can understand Africaa��s problem. But like the curse of identity politics oftentimes, it is debatable if Africa really gained anything substantial from his presidency. True, he organized a US-Africa summit and started the Africa Power initiative but these were more of gesture politics than anything substantial.

In comparison with Obama, when George W Bush, a Republican, was campaigning for US president in 2000, there was angst in the African American community because he was thought to be a spoilt child, a C-average student and a bit aloof, if not racist. His Democratic rival, Al Gore, was overwhelmingly preferred by Africans and African Americans. Yet, under George W Bush, African Americans were given choice positions in government as they never had before – such as Secretary of State (first held by Colin Powell and later Condoleeza Rice), and United States National Security Adviser ( held by Condoleeza Rice, 2001-2005). For Africans, George W Bush set up the President’s Emergency Plan For AIDS Relief (PEPFAR/Emergency Plan) to address the global HIV/AIDS epidemic and help save the lives of those suffering from the disease, primarily in Africa. PEPFAR is said to be the largest health initiative ever initiated by one country to address a disease. The programme has provided Anti-retroviral treatment (ART) to over 7.7 million HIV-infected people in resource-limited settings a�� as of 2014. So far we can argue that despite our concerns at his acerbic rhetoric, Trump has actually proved more useful to us, at least in the fight against Boko Haram, than the nice and urbane Obama government. One of the lessons from this is that our political messiahs may not come from expected quarters.

Four, did the US president really pat Buhari on the back in the fight against corruption when the 2017 Report talked about a�?massive corruptiona�? at all levels of his government and criticised the anti-graft agencies in strong terms? Trump was reported to have said: a�?Nigeria has a reputation for very massive corruption. I also know that the President (Buhari) has been able to cut that down very substantially. We talked about that, he is working on it and they have made a lot of progress and I think they will continue to make a lot of progress.a�?

Since it is not clear whether the above comment should be taken literally or whether it was one of Trumpa��s famed a�?alternative factsa��, I should leave it at that. Suffice it to add that privately, and given the weight of the State Departmenta��s 2017Human Rights Report for the country and the recent report from Transparency International, Buhari must have realised that his anti-corruption campaign a�� like those before his- is not working and needs re-thinking. In this context, his constant talks of the corruption of the Jonathan government as part of his anti-corruption campaign, not only will fail to mobilize the sort of citizen anger he expects but will also make his government appear hypocritical. Unfortunately the Vice President has also keyed into that mantra of bashing the Jonathan government on corruption a�� a move that would only square him against the anti-Buhari forces from his Southern base who have largely avoided confronting him. Ironically, if these elements from his southern flank move against him, it will also embolden his other enemies in the government to move frontally against him, especially if Buhari wins re-election. The Vice President earned accolades as Acting President by delicately balancing all interests in his utterances and engagements (including loyalty to the President). It is ill-advised to abandon a strategy that has served him and the government in general so well.

I Visited Obasanjo And Learnt How To Play Ayo!

9 thoughts on “Lessons from Buharia��s meeting with Trump”