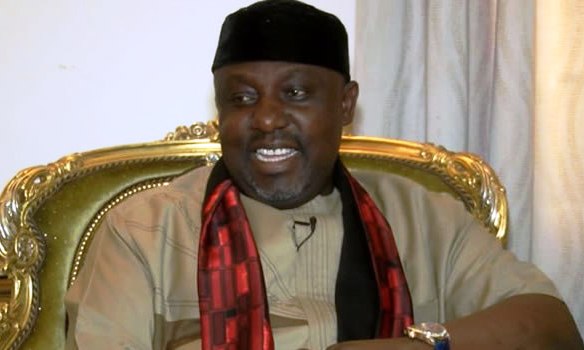 Sometimes it is good that certain events happen so that one knows both his strengths and weaknesses. Other times, it is good such occur for one to know his true friends, believers, enemies and pretenders. In fewer occasions they ought to come for one to learn life-lessons, turn a new leaf, or face existential costs and the drumbeat of destiny.

To say the truth, His Excellency might not have been well-fed with the nagging realities adjoining the choice of his son-in-law, Ugwumba Uche Nwosu, as his successor in Douglas House come 2019. The truth is that the desire was well nurtured, but the choice and targeting were misplaced. Most people criticise His Excellency because Uche Nwosu is his son-in-law. But this would not have come if the prime target was actually familiocracy as some social analysts allege. If His Excellency had taken Chuks Ololo, who is same in-law as Uche Nwosu, and from Owerri zone that all clamour for, this turmoil would not have come. As an in-law, Chuks Ololoa��s choice would have quelled the current crises in the party, if he targeted nepotistic affinity.

If as others allege that His Excellency wants to install someone from his Rescue Mission faction, there are many of them outside Uche Nwosu. There are Eze Madumere, Jude Ejiogu and Chima Anozie, etc, whom His Excellency had in various capacities in the past, entrusted, tested and trusted. Nobody is permanently perfect. Any of them can lead Imo very well, with His Excellencya��s guiding eyes on him, and thus save the party from these heat-ups.

If as His Excellency insists that Uche Nwosu is the most credible candidate who can deliver and continue his good works in the State. This may be true from his evaluation vintage point. But there are other factors he needs to take cognisance of. There is the zoning and Imo charter of equity that has Owerri zone misplaced in the scale; to the irritation, clamour and support of the greater percentage of Imolites. There is the issue of Owerri North LGA that has been wounded mostly in this regime- The Agbasos and their sacrifices, Captain Iheanacho whom this administration pinched much, Sir Jude Ejiogu that was suddenly retired and he went home silently (and Prof Protus Uzorma and other critics focused on him as the actual successor of the Governor, in imitation of Godswill Akpabio), and Barr Chima Anozie who at all times has been faithful, of inestimable value to His Excellency and with amazing career, quality and personality carriage needed for Imo leadership and policy continuity. Given our disinterested findings, the latter, Barr Chima Anozie (aka, Home Base), appears best alternative for Uche Nwosu and a better platform for bargaining cabinet formation more than other Owerri zonea��s aspirants. Recent discoveries show he is at peace with all Imo APC gubernatorial aspirants, with His Excellency, with Imo APC chieftains and with the pressing Metropolitan Archbishop of the Catholic Diocese of Owerri.

There is also the issue of harmonising and reuniting the party in other to face APCa��s opponents at various levels of elective positions state-wide. On this, His Excellency seems to be carried away by his desire for his son-in-law, oblivious of the after primarya��s politics. Sir, the party has been torn apart like the Kingdom of David. What you have is like the kingdom of Judah alone, while the other 11 tribes have eluded your grasp and have also infiltrated your camp. What His Excellency has in the Ugwumba camp is pure miniature of what are outside his fold. Imo APC now is divided into three fiefdoms. The coalition of aggrieved guber aspirants has now usurped 45% of the former Rescue Mission. Ugwumba group has just 15% a�?true followersa�� and 85% a�?pretenders,a�� who play cross-camp and Nichodemus activities to either Home Base or Destiny camps. His Excellency will know their true stand at these post-congress weeks and after lavishing the designated funds, which they target. As presently assessed, Chima Anozie, being on his own, noiselessly now commands 40% of Imo APC, and can easily win the primaries without the assistance of the two clashing camps.

His Excellency, danger looms ahead. The possibility of Ugwumba succeeding is very minimal, given the realities above and the possibility of coalition at the primaries, the sort that Nwodo did in 1998 and denied Alex Ekwueme the PDP presidential ticket, and Obasanjo won. Those aggrieved aspirants are wont to such as last resort. If they see that they wouldna��t make it, Sir, their third option would not be far from collapsing into Barr Anozie to get the majority, as he is very neutral in the struggle and pulls intimidating weight. If this happens, they would have 85%, plus few that may decamp instanter to join them. Most people giving Ugwumba support now are doing so to cut their own share of the a�?State cakea�� and some, because they need his assembled delegates for their own primaries too, a symbiosis. But Sir, these aspirants also have the non-principal officers who cannot vote for Ugwumba. These supporters also will soon focus on their own elective projects. Now the Ward Exco elections are done, and names will be certified, most people who out of fear followed Ugwumba will run away, since they cannot be changed again.

Given the above, His Excellencya��s prestige and dignity are at stake. If he succeeds, he is a hero in a pyrrhic victory, as these considered foes will regroup into inter-party coalition with PDP and APGA for the election proper, to frustrate Ugwumba. Their problem is Uche Nwosu, any other credible candidate is acceptable. While the PDP and APGA pray fervently for either Nwosu or Araraume to emerge as APC ticket bearer, it remains a real risky venture for His Excellency not to recant on his mission and reconsider either Eze Madumere, Sir Jude Ejiogu or Barr Chima Anozie, who are from Owerri Zone and have intimidating qualities to carry on the so cherished legacies that need continuity. It will be disgraceful to His Excellency, to soar for 8 years like an eagle and fall like a winged termite. The sundry revolutions, attacks and counterforce coming from various angles are preludes to and prefigure the dangers, shames, disgraces and failures lurking ahead.

Imolites are no longer happy with their former delight, given the current demolitions in the State and other praiseworthy projects now considered as anti-people. The former government policies that were applauded are now averse, and the recent dispositions of His Excellency towards APC apex leaders, State and Wards Excos; as well as gossips about his son-in-law, all suggest an unsuccessful outing in the forthcoming primaries. His Excellency needs thus to smartly retrace to Owerri zone and pick a candidate from there and perhaps project Uche Nwosu as Deputy Governor. It is fatherly, wise and never failure or humiliation. This will quell the crises and restore His Excellencya��s credibility, integrity and prestige as apex leader of the party in Imo State. Let His Excellency ponder on these.

12 thoughts on “Letter to His Excellency, Governor Rochas Okorocha”