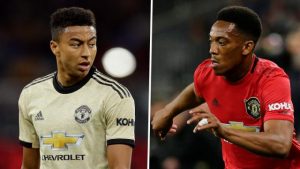 A man who once marshalled the midfield for the Red Devils has questioned some of the decisions being made at Old Trafford and the collective quality of the squad.

United were unable to secure Champions League qualification again last season, with another managerial change being made, and are now in the process of having to rebuild once more.

Ince has suggested that is because too many players are not delivering to the required standard, with four international performers among those to have frustrated the most.

“Jesse Lingard was diabolical last year, he really, really was.

“Then there’s Alexis Sanchez. They got nothing out of Sanchez whatsoever.

“So as much as we’re talking about the defence and Chris Smalling and Harry Maguire, surely we’ve got to be looking at who’s going to be playing up top.

“We need to be looking at that because attacking-wise they’re not great.

United are in the process of trying to bring added quality onto their books during the summer transfer window.

Ole Gunnar Solskjaer has been given money to spend, with some of that having already been invested in Daniel James and Aaron Wan-Bissaka.

There is the promise of more arrivals to come, with Sporting midfielder Bruno Fernandes and Leicester defender Maguire among those said to be in the Red Devils’ sights.

They have, however, been warned that the former will not come cheap, while the latter is drawing admiring glances from elsewhere.

That could make it difficult for United to make all of the additions that they are looking at, which will pile pressure back onto those underperforming stars already on the club’s books.

There may also be departures before the next deadline passes, with speculation continuing to suggest that Romelu Lukaku and Paul Pogba could be among those to move on

Ronaldo hints at exit: “It has been very nice playing for Real Madrid”