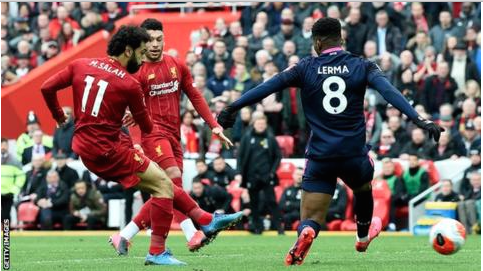 Liverpool defeated Bournemouth 2-1 courtesy of goals from Mohammed Salah and Saido Mane to bounce back from their slump in form.

The Reds had lost three out of their last four matches before playing the Cherries.

Calum Wilson gave Bournemouth an early lead in the first half before Mohammed Salah restored parity for Liverpool, Mane scored Liverpool’s second goal eight minutes later as the first half ended in favor of hosts at Anfield.

Klopp is relieved after guiding his team to their first win in three matches.

“I know what the boys are able to do, but I am not the one that is playing, they are. We have said before, confidence is not something that you get, put in your pocket and keep for the rest of your life. It comes and goes.

“You need that feeling where things work out.
“You have to fight hard, that’s always the main thing to do, but we have 82 points now, which is really nice. We have to carry on fighting.

Give everyone a proper fight and that’s what we did today.”

Liverpool will be without Alisson Becker on Wednesday in the Champions league second leg clash against Atletico Madrid.

148 thoughts on “Liverpool Bounce Back With Bournemouth Victory”