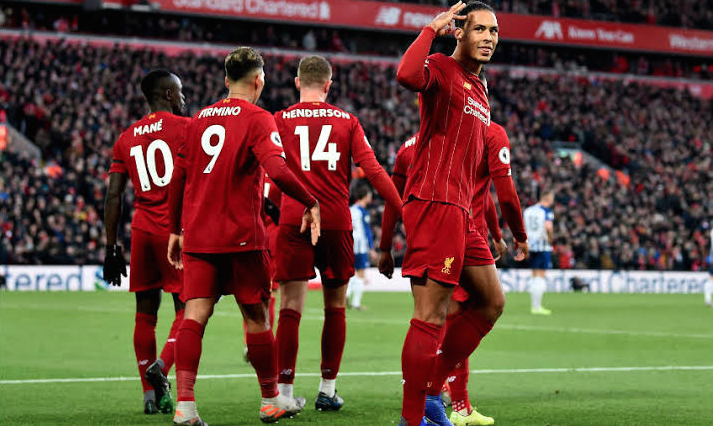 Van Dijk opened the scoring with a glancing header after he was poorly marked by Manchester United defenders to give Liverpool an early lead.

Roberto Firmino’s goal was ruled out because of Van Dijk foul on De gea in the build up to the goal.

Manchester United caused Liverpool problems towards the end of the match but they could not find an equaliser as Liverpool defended doggedly while trying to also get a goal to wrap up the match.

Mohammed Salah scored his first ever goal against Manchester United when he finished off an Alisson’s long pass with a cool finish to calm the nerves of Liverpool supporters.

Liverpool are now 16 points clear of Leicester City after the Foxes lost to Burnley 2-1 to fall further behind in the title race.

We dominated the game, especially in the first half. The energy they put on the pitch was incredible.

“On a normal day we would have scored three times in the first half and in the second half until 65 minutes we should have been more clear.

“But then United have obvious quality, played a bit more football and we had to defend.

There were little mistakes here and there, we didn’t use possession well enough and so the game stays open.

“Then we scored a wonderful, wonderful goal at the end, a really good feeling.”

“Of course they are allowed to dream and sing whatever they want and, as long as they do their job in the moment we play, all fine. But we will not be part of that party yet.”

Liverpool will hope to continue their impressive form when they travel to Wolves on Thursday.

‘Most significant down we’ve had for a long time’