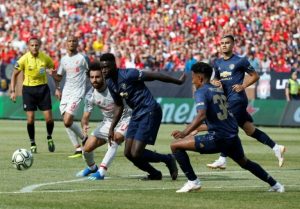 Liverpool scored three second half goals as they wrapped up their pre-season tour of America on Saturday with a dominating 4-1 victory over Manchester United at Michigan Stadium.

Xherdan Shaqiri put a stamp on his Liverpool debut with a spectacular bicycle-kick goal to round out the scoring in the International Champions Cup match in front of a crowd of 101,000.

Shaqiri, of Switzerland, was one of five recent high profile signings which saw Liverpool shell out more than 200 million pounds ($260 million US) in an attempt to close the gap on Premier League champions Manchester City.

It was a nice way for the Reds to finish up their US exhibition swing as they now travel back to Merseyside before continuing their preparations for the season with a training camp in France beginning next week.

Sadio Mane converted a penalty to open the scoring for Liverpool in the 28th minute.

Shaqiri, 26, did the heavy lifting on the play, outmuscling a United defender and then slipping a pass back to Sturridge who made it 2-1.

Sheyi Ojo then scored off a spot-kick in the 74th minute. That set the stage for Shaqiri to bring the packed stadium to its feet eight minutes later with his overhead kick from inside the box off a nice feed from Ben Woodburn.

‘We are having the season that we are deserving’