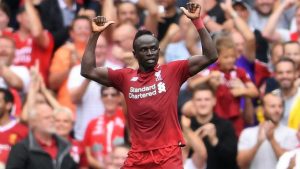 Two goals from Sadio Mane and a Mohamed Salah strike helped Liverpool to a 4-0 win in their Premier League opener against West Ham on Sunday.

Jurgen Klopp’s side made light work of the Hammers at Anfield to move above Chelsea at the top of the table, the latter having beaten Huddersfield Town 3-0 on Saturday.

Liverpool handed full debuts to new signings Alisson and Naby Keita, the latter producing a hugely impressive performance at the heart of midfield, while Xherdan Shaqiri made a late appearance off the bench.

But it was two of the Reds’ established heroes who sealed the three points, Salah prodding home Andy Robertson’s 19th-minute cross before Mane netted twice from inside the box either side of half-time. Substitute Daniel Sturridge bundled in a late fourth.

Mane’s second should have been disallowed for offside but that was the only complaint West Ham could have about the result, with Manuel Pellegrini’s expensively-assembled side looking a long way from settled.

Liverpool, though, were comfortable without ever needing to hit top gear and certainly look like the title challengers most consider them to be.

What does it mean: Reds look sharp, Hammers hopeless

These were two of the biggest-spending sides of the transfer window, with Liverpool splashing out close to £177million and West Ham investing close to £100m, but only one of them looked anywhere close to a team.

There were components to Pellegrini’s set-up that looked promising at times in the first half and Marko Arnautovic wasted two decent chances, but the manner of their defending and their approach play in attack will be a cause for concern even after only one game.

Liverpool, meanwhile, did not even have to play amazingly well to look very promising. Although their goals owed plenty to the Hammers’ dreadful defending – and, in the case of Mane’s second, an extraordinarily poor offside call – they looked slick, compact and dangerous from the first minute to the last.

Any question marks over Klopp’s hopes of getting his new players to gel quickly look to have been promptly dismissed.

Pat on the back: Keita commanding
Liverpool fans have spent over a year getting ready to watch Naby Keita in a Premier League game at Anfield, and it was worth the wait.

The midfielder was a powerhouse in the centre of the pitch, bursting forward to start attacking moves and snuffing out the admittedly limited West Ham attacks with ease.

He will certainly have more difficult games than this, but this was an encouraging start for the 23-year-old.

As debuts go, Felipe Anderson’s at Anfield was somewhere in the territory of Jonathan Woodgate for Real Madrid.

Okay, the Brazilian did not score an own goal before being sent off and did at least manage 62 minutes, but such was the impact of his first-half display that he may as well have spent much of it in the dressing-room.

He regularly lost the ball either through poor dribbles or wayward passing, made a laughable attempt to challenge Keita on the edge of his own box, and stood and watched as James Milner waited for the ball to float his way before crossing for Mane to make it 2-0. It was hardly what you would expect overall from a £36million signing.

What’s next?
Liverpool now have a full eight days to recover until their second league game of the season against Crystal Palace on August 20.

West Ham, though, are back in action next Saturday when Bournemouth visit London Stadium. It could require a tough week of training from Pellegrini to get his players ready.

‘Don’t drop a Ferrari in the mud’: Boomer