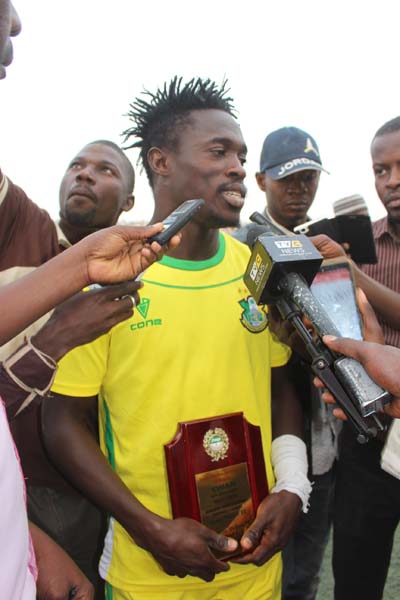 NPFL Rave of the Moment, Junior Lokosa is excited to end his mini goal drought after scoring a brace as Kano Pillars defeated Heartland 2-0 in Kano on Sunday.

Lokosa, who is the highest goal scorer in the Nigeria Professional Football League, he is also the highest scoring Nigerian Striker in any league in the whole world.

Lokosa failed to score in his team’s last two matches before finding joy against bottom-placed Heartland.

a�?Ia��m happy with the two goals against Heartland. The fact that we won also makes it a good a one for me,a�? Lokosa said

a�?I was disappointed with my performance in the previous two games against Wikki Tourists and Lobi Stars and challenged myself to do better in subsequent matches.

a�?Ita��s good to see the hard work come to good effect. Now, I have to keep working hard and keep scoring and helping the team.

a�?The win has put us in a good position in the table even though we are not at the top yet, but we will work hard to get there.

a�?We are on course to challenge for the title and wona��t relent until we achieve our objective.a�?

Here is Jose Mourinho's Premier League title favorite, and it's not Manchester United

I do not know of Chelsea player unrest over training methods: Conte