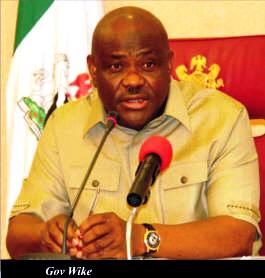 The Rivers State Governor, Nyesom Wike, said on Sunday that the invasion of the Senate was a plot by the Federal Government to overthrow the Senate leadership personified by Sen. Bukola Saraki (President) and Sen. Ike Ekweremadu (Deputy).

The governor in a statement by his Special Assistant on Electronic Media, Simeon Nwakaudu, also alleged that the Federal Government wanted to use security agencies to frame him by planting somebody to claim that he received $3m from the Rivers State governor.

He said, a�?They (FG) plotted to overthrow the leadership of the Senate, but they failed. What you saw was a horrible design to remove the Senate leadership.

a�?If you know the security architecture of the National Assembly, nobody can go in easily and leave easily without the gates being shut. These people entered and left unchallenged.

a�?When the Senate gave the police a 24-hour ultimatum to find the mace, the Nigeria Police became so efficient that they traced the mace to where it was left under the bridge.a�?

Meanwhile, a human rights lawyer, Mr. Femi Falana (SAN), said on Sunday that the mace was not required for parliamentary proceedings in Nigeria to be valid.

He said in a statement that by virtue of section 54 of the Constitution either of two houses of the National Assembly was competent to sit and conduct proceedings once the quorum of the members was formed.

Falana said, a�?While the police investigation into the embarrassing invasion of the Senate is in progress, it is pertinent to point out that the mace is not a prerequisite for parliamentary business in Nigeria.a�?

a�?In other words, the proceedings of a legislative house cannot be invalidated because of the absence of a mace,a�? Falana added.

Describing the mace as a colonial legacy which was part of the Nigerian parliament in 1960 when the Queen of England was Nigeriaa��s Head of State, Falana said a�?our legislators should stop attaching undue importance to the conventions of the British Parliament.a�?

The governor added that it was unfortunate that President Muhammadu Buhari claimed that Nigerian youths were lazy while he was speaking abroad.

He said no investor would invest their resources in a country where the youth lacked productive capacity and called on Nigerians to work towards a new administration at the federal level in 2019.