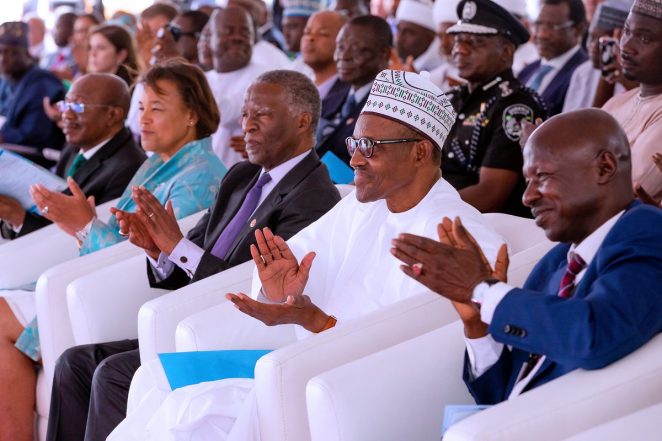 Nigerians have been called to take the bull by the horn on the fight against corruption as the Nigerian anti-graft agency commissions its new ultra modern multi billion naira headquarters in Abuja yesterday.

The Economic and Financial Crimes Commission (EFCC), Ibrahim Magu made the call when President Muhammadu Buhari was commissioning the new ultra modern EFCC he headquarters that cost about N24 billion yesterday in Abuja.

The commissioning was attended by both national and international dignitaries with the intention to curb corruption in the country which has bedevilled the country.

Speaking with some newsmen, students groups and civil society organizations, the Chairman, EFCC, Ibrahim Magu said that one of the ways this fight can be won by Nigerians is to embrace “the 'see something say something'” slogan.

During the Chairman's welcome address he mentioned how the EFCC had collaborated with the FIRS to recover funds from tax evaders which can be corroborated with the Ministry of Finance recent announcement that 14 whistleblowers will be paid the sum of N439.276 million for providing tips on tax evaders.

The Ag. EFCC Chairman also reiterated the agency's 'Zero Tolerance To Corruption' of all forms and vowed to keep momentum on the fight regardless of who is on the other side of the law.

According to him, “there will be no hiding place for corruption, we are ready to engage everyone included in this fight, that is why we are calling on every Nigerian to own the fight against corruption,” he said.

“This year alone we have secured 89 convictions and within the last 2 years 418 convictions and this is with over N500billion well remitted to the federal government and in accordance with the laws.”

Ibrahim Magu urged that Nigerians must begin to take action against corruption by taking ownership of the fight.

“Fighting corruption is key not only to free our society from immorality but from poverty and underdevelopment,” Magu said.

6 thoughts on “Magu Tasks Nigerians On Fight Against Corruption”