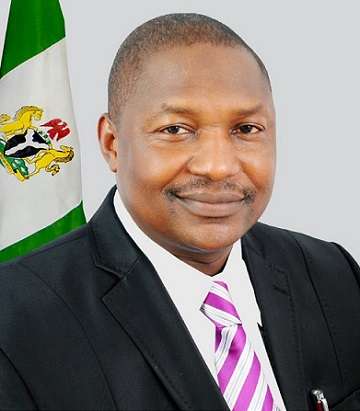 BUOYED by rising confidence that he breached no laws in the reinstatement of wanted ex-Chairman of the Presidential Task Force on Pension Reforms, Abdulrasheed Maina, Attorney General of the Federation and Minister of Justice, Abubakar Malami, has rejected the idea of a secret probe by the Senate.

Malami, who is being accused by the Head of Service and the Federal Civil Service Commission of having initiated series of memoranda to effect the recall of the wanted former pension task force chairman, is billed to appear before the Senate tomorrow to explain his role on the controversial reinstatement, which has angered Presidential Muhammadu Buhari.

Malami told Vanguard, last night, that he was keen on being tried openly by the Senate, having been ‘tried and condemned in the public’ over the Maina case. Malami said: “I want to address Nigerians directly on the Maina issue when I appear before the Senate. But I understand the committee to probe the allegations against me and the Minister of Interior wants to do so in camera.

“Trying me in secret after I have been vilified openly by the people is not good enough. I will certainly appear before the committee at eleven o’clock (11.am) on Tuesday (tomorrow) to speak on the matter but if they bring up the issue of trying me in camera, I would recuse myself from the matter and seek alternative way to explain my position publicly to Nigerians.” In leaked memoranda to the media, the Office of the Head of Service of the Federation and the Federal Civil Service Commission claimed they acted on the request of the AGF, Malami, to reinstate Maina into the service. The leaked Memo In one of the explanations made on the matter, the FCSC said: ”Kindly refer to the Attorney General of the Federation/Minister of Justice letter ref no HAGF/FCSC/2017/VOL.1/3 dated 27th April, 2017 requesting Federal Civil Service Commission (FCSC) to give consequential effect to the judgement that voided the warrant of arrest issued against A.A. Maina which formed the basis for the query and his eventual dismissal,” the letter read.

“Further to the aforementioned letter, the Federal Civil Service Commission (FCSC) at its meeting held on 14th June 2017 deliberated on the Attorney General of the Federation (AGF’s) letter and requested the Office of the Head of Civil Service of the Federation (OHCSF) vide letter FC.4029/82/VOL.III/160 of 21st June, 2017, to advise the Permanent Secretary, Ministry of Interior to consider the AGF’s letter, the officer’s case and make appropriate recommendation to the commission.

“The OHCSF accordingly advised Ministry of Interior to consider the matter. The Ministry of Interior at its Senior Staff Committee (SSC)’s meeting held on 22nd June, 2017 considered the disciplinary case against the officer and the letter by the Attorney-General of the Federation and Minister of Justice seeking the reinstatement of the officer as a Director (Administration), SGL.17 in the Federal Civil Service.

“The Ministry of Interior’s Senior Staff Committee (SSC) deliberated on the case and recommended that Mr Maina be reinstated into the service as Deputy Director, SGL. 16. The Office of the Head of the Civil Service of the Federation (OHCSF) vide letter Ref. No. HCSF/LU/COR/FCSC/749/III/135 dated 14th August, 2017 forwarded to the recommendations of the Senior Staff Committee (SSC) of the Ministry on Interior to the FCSC for further necessary action.”

Once Maina was brought back into the service, President Buhari became upset and ordered his immediate sack early this month, sparking a row between the HoS of the Federation, Winifred Oyo-Ita and the Chief of Staff to the President, Abba Kyari, over the leakage of the memo, showing how the wanted man was brought back and how Oyo-Ita advised against it but was ignored. Irked by the controversy, the Senate mandated its committee on Establishment and Public Service to probe those behind the act and recommend possible sanctions. But Emmanuel Paulker, the chairman of the committee, who represents Bayelsa Central, declared on Friday that both Malami and Dambazzau would be tried in camera. Paulker said the committee would only make its findings known to the public at the end of the investigation and assured that it would, however, be transparent before, during and after the investigations and that nobody would be witch hunted.

Paulker said: “It should be stated for the purpose of emphasis that the National Assembly, which is constitutionally saddled with the responsibilities to perform this exercise, is not expected to base its conclusion on the preponderance of views being expressed from members of the public, hence the need to conduct this investigative hearing to be in the right position to make appropriate recommendations to the Senate.

“For the avoidance of doubt, it is pertinent to categorically state that we are not on a witch hunting mission, but to perform our mandate in line with the constitution of the Federal Republic of Nigeria, 1999, as amended and the Senate Standing Rules.”

“I had sex with actress Mercy Aigbe many times, I have pictures” – Abuja Stylist

9 thoughts on “Maina: I want open trial or nothing – Malami”