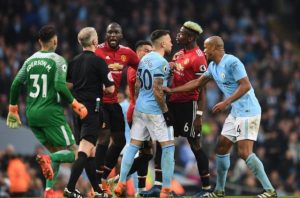 MANCHESTER a�� What. A. Game.
Manchester United denied bitter rivals Manchester City winning the Premier League title on Saturday as they overturned a 2-0 deficit to win 3-2.

Remember: Man City only needed a win against their bitter rivals to secure the trophy in the fastest-ever time in top-flight history.

Goals from Vincent Kompany and Ilkay Gundogan had City 2-0 up inside 30 minutes but United came roaring back in the second half.  Paul Pogba scored twice in three minutes at the start of the second half to turn the game on its head, while Chris Smalling scored the winner to stun the home fans inside the Etihad.

Here’s what we learned from a bonkers game in the Manchester Derby.

DESIRE TAKES OVER FOR MAN UNITED
Manchester United were dead and buried and half time. Dead and buried. Trailing 2-0, they should have been at least 4-0 down after letting Raheem Sterling go clean through and then he missed two sitters.

United were dragged back into the game by not only their fine attacking play but also their pride as they cut City’s lead atop the table to 13 points.

It was one of the great turnarounds in Premier League history.

Jose Mourinho’s side have heard all season long just how good City are and now they had the perfect chance to deny City winning the title. It didn’t start well, at all, but United have made a huge statement against a City side which was understrength given their their UEFA Champions League quarterfinal second leg against Liverpool on Tuesday.

United, and Mourinho, played the role of party poopers expertly. This was just their fourth win in their last 14 games against City, as the power continue to shift to City. But it was more than that. It was about pride and delaying the inevitable.

City’s fans were already in full party mode in the 30th minute when they went 2-0 up but they will now have to wait until Apr. 22 at the earliest to seal the title.

Mourinho has now won just five times in 21 meetings with Guardiola but there’s no doubt this will have been the sweetest victory.

On the eve of the Manchester Derby, Guardiola revealed that Pogba’s agent, Mino Raiola, had offered Henrikh Mkhitaryan and Pogba to Man City in the January transfer window.

Pep had played the mind games and Pogba was in the middle.

Much-maligned in recent months at United for his displays on the pitch and attitude off it amid reports of a relationship breakdown with Mourinho, Pogba inspired United’s fight back with two goals of real quality.

Pogba drove United on from midfield and proved he can flourish in a more attacking midfield role. For all of his critics, Pogba turned up when it mattered most.

In the first half he was part of the problem as he allowed City’s midfielders, particularly David Silva , to run the show. City in full flow aren’t easy to stop but Pogba looked flustered in the first half after a testing time.

Yet Pogba’s complete turnaround after the break summed up United’s incredible revival. It was perhaps sink or swim time for Pogba with regards to his United future. He proved there’s still plenty of fight left in him despite a turbulent week. And maybe, just maybe, Guardiola will give Raiola a call back in the summera��

CITY DO A a�?CITYa�?
Sandwiched in-between two UCL quarterfinals against Liverpool (and trailing 3-0 from the first leg at Anfield on Wednesday), this was always going to be a tough game for City.

But there was something so poetically a�?Man Citya�? about this. Their fans will tell you that doing a�?a Citya�? is to crumble right at the time you don’t expect them to. To falter when it seems like that could never possibly happen. It happened so many times over their history it became a trait and it reared its ugly head again on Saturday, just when everyone seemed to be getting ready to pop the Champagne bottles.

Mary fires up over Dugan No. 1 questions

Ross Barkley feeling 'fitter than ever', ready to impress under Sarri