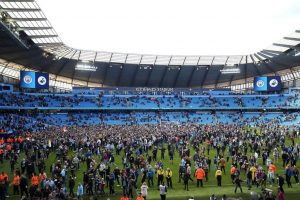 Manchester Citya��s jubilant fans ran onto the field in their thousands, singing and dancing as the Premier League championsa�� title celebrations exploded into life at Etihad Stadium.

The mood was more muted at Emirates Stadium at the start of Arsene Wengera��s long goodbye to Arsenal.

City and Arsenal enjoyed big home wins in the league amid contrasting atmospheres on Sunday, a clear signal of the state the two clubs find themselves in with three weeks left of the season.

A 5-0 win over Swansea was the latest master-class delivered by City, which has turned to chasing records after clinching the title in record-equaling time last weekend. There was a party feel throughout the game and, after the final whistle, City fans stormed the field and mobbed players in a good-natured celebration.

Hours earlier, Wenger had stepped onto Arsenala��s pitch before kickoff against West Ham, two days after announcing he would be leaving the London club after 22 years as manager. There was no acknowledgment of the 68-year-old Frenchman from the stadium announcer and fans only chanted about him in response to taunts from West Ham supporters.

Arsenal, languishing in sixth place and 33 points behind City, ran out a 4-1 winner in Wengera��s third-to-last home match in charge.

Another team celebrating was Chelsea, which beat Southampton 2-0 at Wembley Stadium to reach the FA Cup final. The team will return to the national stadium next month to play Manchester United, which beat Tottenham on Saturday.

Also Sunday, Stoke drew 1-1 at home to Burnley in the Premier League and is now four points from safety with three games remaining.

CITY STROLL
The league title might have been wrapped up but Man City still has something to play for a�� records.

The best-ever haul for points, goals, goal difference and title-winning margin is in sight for City after a dominant display against Swansea in which David Silva, Raheem Sterling, Kevin De Bruyne, Bernardo Silva and Gabriel Jesus all scored.

With four games left, City needs six more points to post the most points outright in a Premier League campaign, six more goals for the most goals, and two more wins to post the most victories. Its current goal difference of plus 73 is two better than the all-time best, Chelseaa��s 71 in 2009-10.

The biggest title-winning margin is 18 points a�� by Manchester United in 2000 a�� and Citya��s current lead over second-place United is 16 points.

WENGER BEGINS FAREWELL
The perfect send-off for Wenger would be if Arsenal won the Europa League, giving the Frenchman an 11th major trophy in his long spell there and returning the club to the Champions League.

The team plays Atletico Madrid in the first leg of the semifinals on Thursday and warmed up for that with a win that was only sealed in the final 10 minutes, when Aaron Ramsey and Alexandre Lacazette (twice) scored. Before that, Nacho Monreal netted in the 51st minute to put Arsenal ahead only for West Ham to equalize through Marko Arnautovic.

CHELSEA INTO FINAL
Speculation is rife about Antonio Contea��s future at Chelsea beyond this season, so it may be that the Italiana��s last game in charge is the FA Cup final against Man United.

That would put Conte up against managerial rival Jose Mourinho, at the end of a season when the two coaches have insulted each other in a very public spat.

a�?We are talking about two managers with a strong character and about two winners a�� for sure we want to try to win this trophy,a�? Conte said.

Strikers Olivier Giroud and Alvaro Morata scored for Chelsea, which reached the final for the second straight year. Last season, it lost to Arsenal in the showpiece.