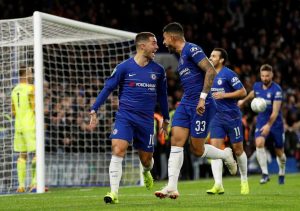 A London derby between the two Premier League clubs will take centre stage in January’s last four, while a League One side plan for an upset

Tottenham  and  Chelsea  will square off for a place in the  Carabao Cup  final while  Manchester City  face Burton Albion in the other last-four tie.

A trio of  Premier League  clubs are left standing in the competition but at least one will be eliminated when Spurs – 2-0 winners at north London rivals  Arsenal in the quarter-finals – take on Maurizio Sarri’s side, who edged Bournemouth 1-0 at Stamford Bridge.

Son Heung-min and Dele Alli provided the goals for Spurs at the Emirates Stadium on Wednesday, while Chelsea prevailed thanks to a late strike from Eden Hazard.

Tottenham will host the first leg as they seek to avenge the 2015 final defeat they suffered at the hands of the Blues, when goals from man of the match John Terry and Diego Costa went without reply.

Holders City, meanwhile, will be confident of securing a return to Wembley after being drawn against League One outfit Burton, who progressed on Tuesday courtesy of a 1-0 win away at  Middlesbrough .

Pep Guardiola’s men battled through on penalties over  Leicester City  after drawing 1-1, a fine late strike from Marc Albrighton cancelling out Kevin De Bruyne’s opener to take the game to the spot.

The first legs will take place in the week commencing January 7 with the reverse fixtures held a fortnight later.

OptaJoe
✔ @OptaJoe
2 – Chelsea have only lost two of their previous eight League Cup games against Spurs (W4 D2), with their most recent meeting coming in the their 2015 final win (2-0 at Wembley). Stakes.

PDP releases timetable for selection of presidential, other candidates

Costa could miss the rest of the season after red card