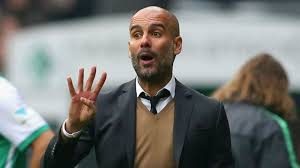 Three thoughts on Manchester Citya��s 4-0 win over Basel on Tuesday in the first leg of their Champions League round-of-16 tie.

1. City take care of business
Ruthless, fearless and simply a class above, Manchester City showed why they are seen as one of the favourites for the Champions League, even if manager Pep Guardiola isna��t sure if his side are quite ready to compete for the trophy yet.

City took their swaggering Premier League form to Basel and destroyed the Swiss champions with the tie effectively over inside 23 minutes.

Basel knew it was going to be a big ask to overcome City, but after beating Manchester United and Benfica in the group stage, they at least went into the game with hope. That hope was clinically wiped away by a City side that stroked the ball around St Jakob-Park with their trademark effortless freedom and style. The notoriously lively atmosphere was silenced, with the Basel supporters only able to sit back and admire as City opened up the home side with ease.

Basel needed to be almost perfect if they were going to pull off an upset, and coach Raphael Wicky said they must take their opportunities when they come.

A golden chance arrived in the fifth minute when Dimitri Oberlin raced clear, but with Ederson in no-mana��s land, the 20-year-old fluffed his shot and Vincent Kompany got back to clear. They had a penalty shout after 12 minutes when Oberlin stumbled after a clumsy challenge from Nicolas Otamendi, but referee Jonas Eriksson waved away appeals and City made them pay.

Wicky will have been just as frustrated by the simple manner of the opener two minutes later when Kevin De Bruynea��s near-post corner was flicked in by Ilkay Gundogan. From then on, City moved through the gears.

Bernardo Silva, who was a key member of the Monaco side that reached the Champions League semifinals last season, added a second four minutes later with a delightful dipping volley that Tomas Vaclik could only get fingertips to.

Sergio Aguero added a third with a low 20-yard strike that whistled past a static Vaclik and the game and tie was essentially over.

Gundogan curled a delightful fourth after 53 minutes and should have completed his hat trick with a side-footed shot that was well saved but just one of a handful of missed chances in a slightly wasteful second half.

Guardiola has been guarded about City winning the Premier League title a�� even with a 16-point gap over United a�� but even he must find it hard to see a scenario where Basel could possibly pull the game back and proceed to the quarterfinals.

And with the quadruple still alive, that second leg in March could be an opportunity to give some of his regulars a breather a�� coming either side of Premier League games against champions Chelsea and away to Stoke City.

2. De Bruyne ready to take on the best
Guardiola believes that De Bruyne is ready to compete with Lionel Messi and Cristiano Ronaldo for the Ballon da��Or. But to do so, the Belgian has to do it on the biggest stage of all in Europe.

De Bruyne was rested after an hour against Basel with City so comfortable that they could give him a much-needed break after a tiring run of games, but for 60 minutes he showed he is more than ready to take his outstanding domestic form into Europe.

He was once again the crucial pivot of the City side a�� setting up attacks, demanding the ball from his teammates and delivering exquisitely perfect passes.

Without the ball hea��s just as impressive a�� setting the tempo with his industrious battling for the ball while Basel just couldna��t handle his movement and constant ability to find space.

Kevin De Bruyne was far too much for Basel to handle on Tuesday.  Photo by Laurens Lindhout/Soccrates/Getty Images

The real test of whether hea��s in the same class as Messi and Ronaldo a�� the two players who have shared the award between them for the past decade a�� will come in the later rounds when City have to take on the established giants of Europe.

But De Bruyne went to Basel ready to dictate the game a�� just as he did against Chelsea at Stamford Bridge and Manchester United at Old Trafford in the Premier League. And therea��s nothing to suggest he will be scared of doing exactly the same if he needs to at Barcelona or Real Madrid.

3. Aguero continues to step up for Pep
Aguero hasna��t been given the easiest ride by manager Guardiola since the Catalan arrived at the club a�� particularly in their first season together when the former Barcelona coach always demanded more from the striker.

He finished that first campaign with 33 goals form 45 appearances a�� this season he has 29 goals from 34.

But crucially he has stepped up this term just when Guardiola needed him most.

Gabriel Jesus has been out injured since the last day of 2017 with a knee ligament problem and is still around two weeks away from returning.

After a potential January move for Arsenala��s Alexis Sanchez collapsed, Guardiola has been with just one striker for two months, and Aguero has responded brilliantly.

The Argentine now has 14 goals in his past 11 games since Gabriel suffered the injury a�� his last two, brilliant strikes from outside the box, not this normal style.

But ita��s not just his goals that have been so important. His movement and hard running off the ball shows that hea��s fully embraced the Guardiola philosophy.