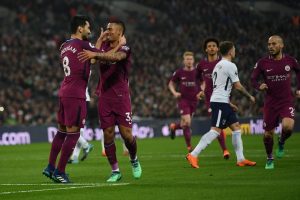 In many ways, Manchester Citya��s battling win over Tottenham was the perfect response to their troubling week.

Sure, Pep Guardiola would have probably wanted his side to have built on their early 2-0 lead and rampaged to a resounding victory, especially having made Spurs look so rudderless in that first half an hour.

After those damaging defeats against Liverpool and Manchester United, City started superbly at Wembley, instantly reminding the chasing pack of what they can do at their best, and what they have done for the majority of the season.

They could not keep up that domination against a side as good as Mauricio Pochettinoa��s but to record a battling victory will do them the world of good, especially as it now puts them just three points from the title.

This was a timely reminder of their credentials, given City headed into this game with question marks against them, their previous achievements only viewed through the prism of their past three games.

Some even wondered if they would throw the title away; Oddschecker, the bookmakersa�� odds compiler, showed that one of their most popular bets on Grand National day was an outlandish 200/1 shot a�� Manchester United to win the Premier League title.

Those odds would have tumbled had City fallen to a defeat here that many had predicted, even when they were leading.

Thata��s because they diced with throwing it all away again, as they did a week ago against United. Spurs put the pressure on following Christian Eriksena��s goal and City were pegged back, forced to do the kind of defending that many argue they are incapable of producing.

But they stood up to the task, physically and mentally, something they did not do to any degree in their last three games. And against one of the best sides in the country, too; indeed, Spurs had not lost in the league since they were dismantled at the Etihad Stadium back in December.

Guardiola rejected the notion that his side struggled emotionally in their three big games but it is understood that, privately, he was disappointed that his players wilted when the going got tough.

That was not the case here; City dug in for the first 20 minutes of the second half, not allowing Eriksen and Dele Alli any space to create an opening for the prolific Harry Kane. And, without the banned Fernandinho, that is a task worth applauding.

Vincent Kompany and Aymeric Laporte were dependable at the back and Guardiola himself proved a point, having faced accusations that his tactics are too one-dimensional in the last 10 days. The Catalan withdrew Leroy Sane, put on Nicolas Otamendi and moved to a three-man defence, with Fabian Delph and Kyle Walker as wing-backs. That pushed his creative players into the midfield and helped keep control of the match.

That substitution came just after Gabriel Jesus wasted a gilt-edged chance to give his side a 3-1 lead, which would have relieved the pressure even further. The Brazilian raced in on goal but produced a poor first touch and an even worse finish.

Raheem Sterling then missed two other good opportunities and, having done the same against United, it looked inevitable that Spurs would find an equaliser, however it came.

The City fans must have been fearing the worst at that point given what they have seen recently but suddenly their fortunes changed. After Hugo Lloris pushed out Jesusa�� shot Sterling reacted quickest to leather the ball into the top corner. No hesitation that time and City restored their two-goal advantage.

This was a huge victory.